"Now living in a cozy Tuscan Villa with his wife and their two children, Ezio spends his time enjoying the company of family, old friends, and cultivating his vineyards. The life of this former Assassin Mentor will not stay quiet for long.
One day, a mysterious Assassin shows up at Ezio's door quite unexpectedly, begging for Ezio's aid.
Will this old Assassin's fire die out before he can save the ones he loves, or will it burn brightly one last time?"
―Description.[src]

This short film was created and produced by Ubiworkshop, and was completely developed internally at Ubisoft Montreal. To produce the film, Ubiworkshop worked with two other teams: Ubik, and a team from the Technology Group.[2]

Set after Revelations, the film concludes the life of Ezio Auditore, who retired from his life as an Assassin and lived with his wife Sofia Sartor in Tuscany's countryside.

In the year 1524, the former Assassin Ezio Auditore had retired to a villa in the countryside of Tuscany, with his wife Sofia and children Marcello and Flavia. While Ezio wrote in his study, Sofia asked him to watch Flavia while she and Marcello visited his sister Claudia. Shortly after, he left his study to tend their vineyards while Flavia played nearby the villa. In the midst of his harvest, he saw a stranger cloaked in black talking to Flavia. Fearing the worst, Ezio hurriedly intercepted the stranger, though Flavia told him that she was no danger, as Ezio saw her necklace with the Assassin insignia.

Later, the Assassin introduced herself as Shao Jun, and then asked for Ezio's help in saving her people and Order. Ezio refused, stating that his time with the Assassin Order was over, and asked that Jun leave, despite her pleas. Sofia however, bid that Jun should stay, seeing that she came a long way. Jun accepted the offer, while the family prepared to rest for the night. Ezio pondered about the time he had left while watching their children with Sofia. The two then went to bed.

The next morning, Ezio inspected his villa, looking for Shao Jun, and found her reading his writings in his study. Furious, Ezio told her to leave the room, and shortly after, told her to leave Italy entirely, stating that she'd wasted her time looking for him. Shao Jun, reciting a portion of what Ezio wrote in his study, asked him that she just wanted to understand what it would take to restore her Order. Ezio informed her on why he was reluctant to help, stating that it could compromise his family. Afterward, he took her to Florence to help him in the grape harvest.

There, Ezio attended to his business while Shao Jun kept watch. Following this, Ezio took her to the plaza of the Palazzo della Signoria, where half of his family were killed. He then lectured her on how an Assassin's line of work is done, before leaving back to his villa. In the midst of their departure, the two were intercepted by an assailant, who faced Shao Jun in combat. Once the man was dealt with, the two fled, as more of the armed men followed them.

As Ezio drove a carriage back to his villa, Shao Jun explained her past, and that it had been her Mentor's plan to meet with him, but he was killed by the same men in Venice. Jun elaborated that they were Imperial soldiers sent by the Jiajing Emperor, who sought to recapture Shao Jun for her acts against his rule.

After arriving at the villa, Ezio told Sofia to take herself and the children to stay at Machiavelli's home, fearing that the assailants would come at their doorstep. After his family left, Ezio and Shao Jun stayed to prepare for an attack. After telling Shao Jun about how he reformed the Assassin Order in both Rome and Constantinople, Ezio advised her to rest while he stayed in the living room and kept watch.

The Imperial soldiers arrived as expected, invading the Assassin's home. While Shao Jun fought some of the servants in the upper floor, Ezio fought with the others in the lower floor, defeating three of them. Seeing the cannon-wielding brute readying to fire at Jun, Ezio hurriedly made his way to the upper floor to intercept the soldiers and save her from the weapon's fire, which he did so successfully. Afterward, both he and Jun jumped out of a window and onto an open field. There, both of them fought the cannon soldier, and after a tough fight, managed to defeat him.

The day after, Ezio bid Shao Jun farewell, as she thanked him for all of his help. Before leaving, Ezio gave Jun a small chest, commenting that it could help her some day, though said that she should only open it when she lost direction. Just then, government guards approached Ezio's villa. To this, Ezio suggested that Jun leave before they could see her; she complied while Ezio met up with the guards.

Some time after, Ezio finished writing in his study. Sofia then informed him that she and Flavia were leaving for Florence; Ezio decided to go with them. There, Ezio sat down on a nearby bench while the pair bought some groceries, and as Ezio watched, a young man sat down with him and berated the women of Florence.

Despite his disrespectful demeanor, to which Ezio reprimanded him for, the man bid that Ezio should have courage, and advised him to rest before leaving his company. Ezio, as he looked on his wife and daughter, smiled. The two looked back, though with expressions of distress rather than happiness.

Ezio Auditore passed away where he sat at the age of 65. Left behind by him in his study was a letter addressed to Sofia, which read:

"When I was a young man, I had liberty, but I did not see it. I had time, but I did not know it. And I had love, but I did not feel it. Many decades would pass before I understood the meaning of all three. And now, the twilight of my life, this understanding has passed into contentment.

Love, liberty, and time: once so disposable, are the fuels that drive me forward. And love, most especially,

mio caro. For you, our children, our brothers and sisters. And for the vast and wonderful world that gave us life, and keeps us guessing. Endless affection, mia Sofia.

The Comic-Con 2011 panel recommended watching Embers after completing Revelations, so that the events that unfolded are experienced in sequence. The film would run for 21 minutes, offering a unique experience of Ezio's life, and bringing further closure to the Ezio saga.

An early image of the Embers disc

Shao Jun looking at the horizon

Ezio tending to his vineyards

Ezio talking with a Florentine nobleman

The living room of Ezio's villa, where Sofia's portrait can be seen 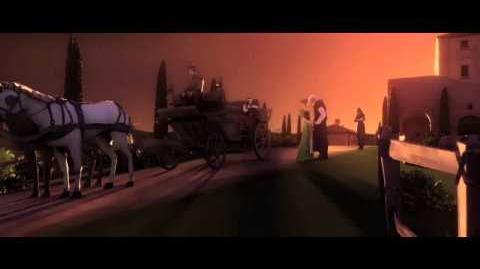 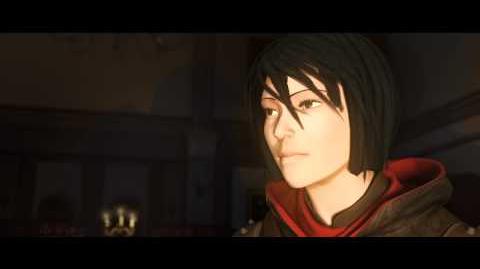