15+
Assassin's Creed: Arena is a board game published by Cryptozoic Entertainment. It was released on 26 February 2014.

Assassin's Creed: Arena is set in Constantinople. In the game, players must compete for contracts to assassinate their targets while avoiding each other and guards.

Players compete to uncover the best targets for assassination, dealing with guards and competitors. To do this, they will collect cards and treasure, move guards, and hide within the city of Constantinople until they find their time to strike. Combat is handled through cardplay, and the player who best manages their cards will have the best chance at victory.

At the start of each player's turn, they draw an Event card, which can spawn new targets in the outer city, move guards, or allow you the discovery of tunnels to other sections of the city. Moving guards allows the player the opportunity to gradually place them near your opponents. Targets cannot be assassinated while a guard is nearby, but the guards can be dispatched if need be.

Cards in hand drive the action, but also determine a player's vitality; if they run out of cards in their hand, they die, causing the player to respawn at their starting area. Moving and attacking targets (or fellow players) requires playing cards, so it is wise to avoid doing too much at once. To replenish their hand, players must complete objectives on their movement cards or hide. Hiding in the outer city grants extra cards, whereas hiding in the merchant district or the area around the palace reduces the amount of cards drawn.

Combat is handled through cardplay. No dice are required, although a six-sided die is included to resolve some guard movement. 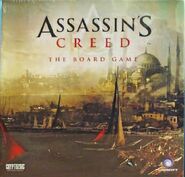