Headquarters of the Venetian Navy.

The Arsenale di Venezia, or Arsenal of Venice, is a complex of former shipyards at the north-east end of Venice in the Castello District.

Throughout its history, it served as the principal source of the Venetian's naval power, being the construction site of its fleets. Around the 14th century, it became a base of operations for the Templar Order, with the renovation of the shipyard in 1320 being paid for by Templar funds. As such, the facility was treated by the Assassins as a Templar lair of treasures. In 1486, the stronghold came under attack by Assassin mercenaries led by Ezio Auditore da Firenze and Bartolomeo d'Alviano, and in the ensuing battle, the Arsenal's Templar commander Silvio Barbarigo and his bodyguard Dante Moro were slain.

Originally established as a naval depot for private ships, in 1320 the Arsenal was renovated through funds provided by the Templar Order. Official ownership by this point transferred to the Venetian government, and with the Arsenal's expansion, it became the largest industrial complex of the city. The state came to rely on it as the production center for its navy and large merchant vessels. At its peak, the Arsenal was able to churn out an entire ship in just a day. Nevertheless, as the benefactors of the renovation project, control of the Arsenal ultimately fell to the secret Templar Order, and from 1320 until 1486, it became their base of operations in Venice.[1]

In 1460, the Porta Magna ('Great Gate') was erected and it has fronted the Arsenal ever since. The gate, built in the classical revivalist style, reflects the popular movement of the Renaissance period.[1]

Battle of the Arsenal

By the latter half of the 15th century, the Templar Silvio Barbarigo, whose family served under the House of Borgia commanded the Arsenal. In 1486, after the assassination of his cousin and a leading Templar, Marco Barbarigo, by the Assassin Ezio Auditore da Firenze, Silvio fled for the safety of the Arsenal. There, the Templars prepared an expedition to collect an Apple of Eden from Cyprus. On the day of the scheduled departure, however, the base was assaulted by an army of Assassin mercenaries led by Bartolomeo d'Alviano and Ezio. Though the Arsenal's defenses had been formidable, much of the garrison had been baited out beforehand by scattered groups of mercenaries, allowing Ezio and Bartolomeo to breach inside.[2]

Unable to defeat the Assassins even with the aid of the bodyguard Dante Moro, Silvio called a retreat in fear that their Templar vessel would leave without them. Sure enough, Silvio and Dante found that they had been abandoned by their vessel and were assassinated soon after when Ezio caught up with them.[2]

Two years later, the Arsenal would serve as the point of arrival for the aforementioned vessel when it returned from its expedition.[2]

Having been a major stronghold of the Templars for at least a century, the Arsenal was host to some of their wealth. At some point from 1486 to 1499, Ezio Auditore infiltrated its drydocks in search for Templar treasures. Entering through a small building in the vicinity, Ezio engaged in a chase with an agile guard through the docks, and by the time he had caught and killed the guard, the pursuit had brought him to a room containing a Templar strongbox. After taking what he wanted of its contents, Ezio exited through a small tunnel, returning to the streets of Venice.[2]

Historically, the Arsenal was mentioned by Dante Alighieri in his Inferno, part of the epic Divine Comedy. There, he compares the boiling pitch in which Grafters are immersed in Hell to the material used to caulk the seams of ships in the Arsenal, which Dante had probably visited during his stay in Venice.

Concept of the Arsenal

Concept art of the shipyard interior

The interior of the shipyard

An overview of the Arsenal 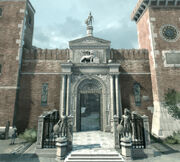 Porta Magna
Add a photo to this gallery

Retrieved from "https://assassinscreed.fandom.com/wiki/Arsenale_di_Venezia?oldid=807583"
Community content is available under CC-BY-SA unless otherwise noted.