The Armor of Ishak Pasha was a powerful set of armor that belonged to the Ottoman general and covert Assassin Ishak Pasha. It was said to hold mystical powers, due to it bearing a cursed marking.

Sometime after Ishak Pasha's death, Sultan Bayezid II entrusted his armor to the Janissary Murat Bin Husn, in acknowledgement of his unbreakable will. Murat devised a plan to keep the armor safe by hiding it in Hagia Sophia, and renovated the Great Chain in Constantinople's harbor to protect the city.[1]

However, around 1511, the Assassin Ezio Auditore was able to collect the scattered memoir of Ishak Pasha, and subsequently discovered the armor's location. Soon after, he retrieved it from the tomb within the Hagia Sophia, after working through a puzzling maze, before returning to the city through the sewers.[2]

Concept art of the armor

One of Ishak Pasha's memoir pages 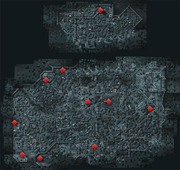 The locations of the memoir pages

Retrieved from "https://assassinscreed.fandom.com/wiki/Armor_of_Ishak_Pasha?oldid=821160"
Community content is available under CC-BY-SA unless otherwise noted.