"I leave my family's armor here, one of the finest sets ever made. May you who finds it receive strength in battle."
―Brutus' writings in the first Scroll of Romulus.[src]

The Armor of Brutus was a virtually unbreakable set of armor once in the possession of the Roman Hidden One Marcus Junius Brutus. It was one of the strongest known armors of the Renaissance and was found alongside the Dagger of Brutus.

The armor was stolen and treasured by the Followers of Romulus, who sealed it within a gate locked by six keys. In 1503, the Italian Assassin Ezio Auditore da Firenze gathered the keys and claimed the armor and the dagger for himself.[1]

The armor looked much heavier and bulkier than Ezio's Master Assassin robes, due to the fur cloak that was padded along the pauldron and around the neck of the hood. It was unknown when the fur was added, but it may have been a tribute to Romulus by his Followers.

One silver eagle decorated the right shoulder, holding the cape in place, while another adorned the belt where Ezio's other outfits featured the emblem of the Brotherhood. In Armor of Brutus, the emblem was engraved onto the back of the armor.

The armor came with a gray, short-sleeved robe that was worn underneath the breastplate. The bottom of the robes featured three layers, one overlaying the other, and came down to Ezio's knees. However, these layers acted in a similar fashion to a kilt, completely covering the legs, whereas the Master Assassin robes parted at the sides and front-to-back to keep movement unencumbered. This did not seem to affect Ezio's mobility, however.

The armor set consisted of both metal and leather. The chest armor and spaulders were mostly metal, but the left spaulder appeared to be made out of a light type of stone, while the vambraces and greaves were completely leather. The latter two pieces were also very plain-looking, having little design compared to the rest of the armor. Unlike other purchasable vambraces, the Vambraces of Brutus came in a set of two, for both Ezio's left and right arms.

The hood and cape appeared to be connected, with both dyed red and possessing a golden trim. There was no detail on the hood itself, and it was more rounded in shape, with a similar appearance to Altaïr Ibn-La'Ahad's hood.[1]

The Armor of Brutus was named after its initial possessor, Marcus Junius Brutus, the Assassin responsible for killing Gaius Julius Caesar. It was an heirloom of his family, but it was unclear exactly when the armor was forged and by whom.[2]

Since it had similar properties to the Armor of Altaïr, this implied that the creator used information gained from an Apple of Eden in order to create it. In his scrolls, Brutus revealed that he himself held a Piece of Eden, although it was unclear whether Brutus used that information to modify an existing set of armor.[2]

Before his death, Brutus hid his armor away in a secret location, which was apparently found and then protected by the Followers of Romulus. The Followers were told by their leaders that the armor had been worn by their deified patron Romulus, and kept the keys to the armor's cage within each of their six secret underground lairs spread throughout the city of Rome.[2]

Upon encountering the Followers in the ruins of Nero's Golden Palace and reading the first scroll of Brutus, Ezio decided to seek out the other keys, eventually obtaining the Armor of Brutus.[1]

Concept art of the Armor of Brutus

The Armor of Brutus in the Animus menu

An older Ezio in the Armor of Brutus 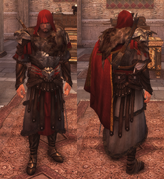 Ezio wearing the armor in Brotherhood 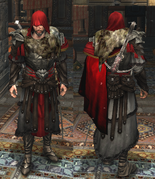 The Armor of Brutus, an armor in Assassin's Creed: Brotherhood, bears a resemblance to the outfit worn by the fictional character Maximus Decimus Meridius in the film Gladiator. It is unknown if the film affected the designer of the original concept of the Armor of Brutus, Vincent Gaigneux. The same game also features a sketch of the armor, created by Donglu Yu, but that differs from its actual appearance in some respects, such as being black with some gold trimmings.

Despite the armor lacking the Hidden Gun, the Poison Blade, and the Climb Leap Glove, this doesn't affect the ability to use these in Assassin's Creed: Brotherhood. In the same game, it is the only armor in to change both Hidden Blade gauntlets. Upon reliving memories following the acquirement of Armor of Brutus, it replaced Ezio's armor in the event that the memory didn't have his current armor available at the blacksmith' shops.

Following Assassin's Creed: Revelations, the Armor of Brutus is not mentioned in the franchise again.

Retrieved from "https://assassinscreed.fandom.com/wiki/Armor_of_Brutus?oldid=872980"
Community content is available under CC-BY-SA unless otherwise noted.