The Arctic Temple was a Seismic Temple located in the Arctic. By the 18th century, the ruins of the temple were largely covered in ice.

In 1760, the Arctic Temple was rediscovered by the Colonial Assassins as well as the Colonial Templars, when the former were able to locate it using the Precursor box and the Voynich manuscript. Upon reaching the central structure within the temple, the Mentor Achilles Davenport and Liam O'Brien were confronted by Grand Master Haytham Kenway and Shay Cormac. Achilles stopped Liam from killing Shay for betraying the Assassins, and Liam accidentally disturbed the Piece of Eden held within the temple, during the struggle.[1]

The disturbance triggered an earthquake, causing most of the surrounding area to collapse. While the four made their escape from the ruins, Shay pursued Liam to a cliff side. However, the cliff collapsed, killing Liam and wounding Shay in the process.[1]

Caverns leading to the temple 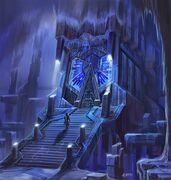 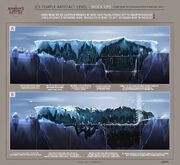 Destruction of the Temple

Shay finding Liam and Achilles in the heart of the Temple