Secured storage at Abstergo Industries (as of 2012)

Apple of Eden #4 was a Piece of Eden, a piece of ancient and technologically advanced equipment created by the Isu to control humankind, their workforce.

The earliest known depiction of the Apple was in a 10th-century Chinese painting, where it was shown as a flaming golden ball held by a small demon.[8]

The painting was also the earliest known pictorial representation of firearms, and the gold ball was thought to have represented an early grenade. Clay Kaczmarek also included a hidden message in his glyph that held this painting; a line of binary code that read "Sumerian Me 23", likely referencing the Apple to be the "Sumerian divine weaponry" that inspired the Chinese to invent gunpowder and early weapons.[8]

The first known human possessor of the Apple was Nikola Tesla, who found it in his home country of Croatia.[2] When Tesla began his experiments and intended to make free, unlimited electricity available to all, the Templars began their campaign to stop him.[3]

Thomas Edison sent a letter to J. P. Morgan urging him to cut funding to Tesla's experiments, and to tell other investors to avoid Tesla. Edison also began publicly slandering Tesla and his experiments, including conducting his own "experiment" to prove that Tesla's electricity could kill people by electrifying an elephant.[3]

At some point later, the Templars broke into Tesla's lab, stole the Apple, and used it to drive Tesla insane.[3]

Edison was granted possession of the Apple afterwards, and later lent it to Henry Ford, who used it to manipulate assembly line workers for profit. However, Ford shipped the Apple to Europe "as per instructions", where it came into the possession of Adolf Hitler. Hitler used it to obtain power in Germany in the wake of the country's recession from World War I, and per the Templars' machinations, used it to lead the country into World War II.[5]

With Germany under his control, Hitler granted the Apple to Obbergruppenführer Gero Kramer, a Templar and one of the founders of Abstergo Industries, at some point before 1943 to use in various experiments. The Templars eventually abducted Nikola Tesla and faked his death, in order to force him to create a secret device using the Apple known as Die Glocke - which Kramer pretended was a nuclear project. The device served as an early version of the Animus, with Kramer hoping the device would let him travel through time to recover other Pieces of Eden for the Templars.[4]

When the Assassin Eddie Gorm was sent to sabotage the nuclear project, he was overpowered by Kramer and placed inside Die Glocke. Tesla, an Assassin sympathiser, had sabotaged the project, and when the laboratory was simultaneously stormed by the Allies, Kramer fled with the Apple of Eden. He was eventually killed on 15 July 1943 by Gorm and Julia Dusk, who took the Apple back to their superior, Boris Pash.[4]

Pash had secretly been colluding with a Templar scientist, John von Neumann, with whom he hoped to use Die Glocke to travel back in time and kill Hitler before his rise to power. When Gorm and Dusk learned of Pash's betrayal, Dusk hoped to destroy the Apple by blowing herself up with a handgrenade, though the artifact remained unscathed and was taken by Pash. On 28 October 1943, Pash and Neumann planned to force Tesla to try another time travel experiment, known as Project Rainbow, aboard the USS Eldridge. Gorm killed Tesla to keep him out of their hands, disrupting the experiment, before seemingly committing suicide.[4] The ship manifested in a future state for approximately 12 minutes, and the artifact was subsequently damaged.[9]

Nonetheless, by 1945 it was once again in Hitler's possession. On 30 April 1945, he was scheduled to kill his body double in the Fürherbunker and take the Piece of Eden to a rendezvous point. Upon leaving the bunker, he was killed by the Assassins and the artifact was taken.[5]

By 1957, the artifact had fallen into the hands of Templar scientist John von Neumann once more. On 8 February 1957, von Neumann met with his former ally Boris Pash, who killed him to retrieve the Apple for himself.[4]

"Data provided from Animus Subject Twelve indicates that the ship briefly manifested in a future state for approximately 18 minutes. It is unclear whether the timeline is consistent with or parallel to our own. Although we have recovered enough data to reconstruct and repair the original artifact used in the experiment, Administration has refused to move forward on the project, citing paradox concerns."
―Alan Rikkin in an email to Warren Vidic, 2012.[src]

By 2012, Abstergo Industries had explored the events surrounding Project Rainbow through Subject 12 and had gathered enough research to repair and reconstruct the artifact. The company refused to do further research into time travel experiments out of concerns of creating a paradox, and determined all artifacts that can cause time travel must be contained and moved to secure storage.[9]

In November 2017, two Templar employees of Abstergo Industries, Thomas and Alice Adler, stole an Animus and abducted Maxime Gorm in order to delve into his genetic memories and locate the whereabouts of the Apple through Eddie Gorm's memories, hoping the artifact would cure their amnesciac daughter Elisa.[4]

Apple of Eden seen in the Glyphs

Nikola Tesla with the Apple

Apple of Eden 4 left unscathed during an explosion 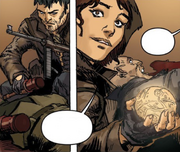 Retrieved from "https://assassinscreed.fandom.com/wiki/Apple_of_Eden_4?oldid=857381"
Community content is available under CC-BY-SA unless otherwise noted.