Apep, or Apophis, is an ancient Egyptian deity embodying chaos. He is usually depicted as a giant serpent that devoured the hearts - and thus the souls- of the dead. In mythology, Apep and Ra have an eternal battle which represents the cycle of night and day.

In 48 BCE, the Medjay Bayek of Siwa experienced a drug-induced hallucination in which he fought and defeated Apep with a glowing bow and arrows aboard Ra's solar barge.[1] A decade later, when Bayek seemingly visited the Duat as part of his mission to end the Curse of the Pharaohs, he found Apep's decaying skeleton.[2] 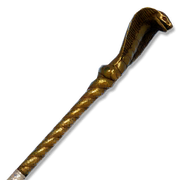 Retrieved from "https://assassinscreed.fandom.com/wiki/Apep?oldid=807525"
Community content is available under CC-BY-SA unless otherwise noted.