Echoes Through the Animus Event

1498
Anniversary Tour – Granada was an altered representation of a glitched genetic memory.

Next we take you to Granada in 1498! Lead Templars on a merry chase through Granada's market as you search for a place to soar. Find the highest point in the Granada streets and synchronize to move on the next stop in our Anniversary Tour!

Three Spanish Assassins met in a safe house. As in the previous memory, this one was also littered with glitches.

The user moved the Assassins through the city and soon reached a bell tower. An Assassin climbed it and synchronized. After doing so, ghostly Animus figures appeared. 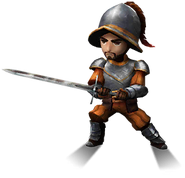