The Body in the Brothel
The Body Politic

Solve the disturbing mystery of the numbered bodies.

Ancestral Vengeance was a virtual representation of one of Arno Dorian's genetic memories, relived by a Helix initiate through the Helix Navigator.

The murderer was Anne de Molay, a descendant of Jacques de Molay seeking revenge for her forebear's torture.
Case Summary
Descendants of some well-known medieval inquisitors had been living peacefully under aliases - anagrams of their forefather's names - until recently when one of them, Bertrand Grimany, (descendant of de Marigny), foolishly gave an interview to a city newspaper. The article exposed his address and he was subsequently murdered, a large bloody roman numeral I inscribed on his wall. However, Grimany managed to wrest a pendant with a key away from his murderer in the struggle. Grimany's friend, Paul Teragon (descendant of de Nogaret) was then murdered, and a bloody roman numeral II left behind. The third descendant, M. de Prasi (from de Paris), would have doubtless suffered the same fate but managed to fight off the attacker. A blood trail leads to the murderer, Anne de Molay, a descendant of the famous Templar victim of the medieval inquisitors. She had taken vengeance on the descendants of her forbearer's torturers. 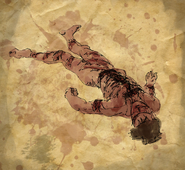 The body of Paul Teragon, marked with the Roman numeral I. 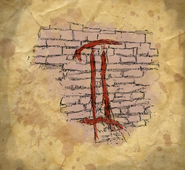 The bloody Roman numeral II painted on the door. 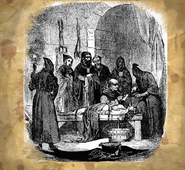 The newspaper article discussing the Inquisition. 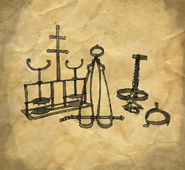 The torture devices found in the homes of Teragon and Grimany. 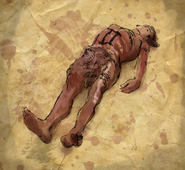 The body of Bernard Grimany, marked with the Roman numeral II. 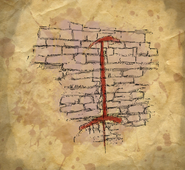 The bloody Roman numeral I painted on the door.
Add a photo to this gallery

Retrieved from "https://assassinscreed.fandom.com/wiki/Ancestral_Vengeance?oldid=787125"
Community content is available under CC-BY-SA unless otherwise noted.