Anaphi, also referred to as Ash Hills, is a Greek island located in the Aegean Sea, between Thera and Nisyros. Together with them, Anaphi formed the Greek region called the Volcanic Islands, and is also part of the Kyklades.

By the Peloponnesian War, the island was largely uninhabited, though ruins laid in the ashen landscape. At some point during said conflict, the Spartan misthios Kassandra explored the island.[1] 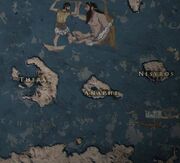