Throughout his life as an Assassin, Altaïr Ibn-La'Ahad wore several sets of robes that each held a different appearance.

While these were initially the standard robes of all Levantine Master Assassins, once Altaïr rose to the rank of Mentor, he abolished the standard uniform system, and he continued to wear these robes for much of his life afterwards. The robes eventually came to be associated with him, as he was well known for wearing them.[1]

The upper body of the robes featured a hood that was shaped like an eagle's beak in the center; this was connected to the main part of the robes, which were plain white.[1]

The lower portion was layered, with the back of the robes extending down lower than the front. Around the waist was a red sash, with pouches containing supplies, and a sheath for a sword connected to a belt.[1]

Scabbards for throwing knives were contained at the right shoulder, at the front of the waist, and on the left boot. Around the back was a belt containing a sheath for a dagger, which was buckled below the shoulder.[1]

After careful study of an Apple of Eden, Altaïr eventually designed and built his own set of indestructible armor, complete with robes. However, Altaïr feared the power of such a design, and what consequences there could be if it fell into Templar hands, and destroyed the blueprints of the armor.[2]

After many years, the armor was locked in the sanctuary under the Villa Auditore, where it was locked behind a metal grate, with six seals required to unlock it. The Italian Assassin Ezio Auditore da Firenze eventually found all of these seals, and claimed the armor for himself.[2]

The metal portions of the armor appeared to have a gold tint, while the leather portions were black. The chest plate appeared to be made up of several overlapping metal guards. In addition to being black, the robes were made up of three layers. Each layer was longer than the one above it, and the longest, lower layer was segmented, giving the whole piece a look resembling an eagle's wings.[2]

Once more, the hood featured an eagle's beak at the center, and a black cloak accompanied the armor, and seemed to be of a similar cut to Altaïr's regular Assassin robes.[2]

A red sash was worn around the waist, along with a belt containing pouches, and scabbards for throwing knives, with a buckle featuring the Assassin insignia over the sash.[2]

After going into exile once Abbas Sofian usurped the rank of Mentor and took over the Assassins, Altaïr donned another set of robes at some point prior to returning to Masyaf.[3]

The robes featured a hood, notably lacking the beaked tip, which was connected to the main portion and a full length cape down the back, which was supported by a buckle on the chest.[3]

The robes themselves were brown, and appeared dirty and ragged, suggesting that Altaïr took little care of them. The robes had a plain design, and extended down below the knees. The robes appeared to carry little pouches, and there was no visible armor, and the Hidden Blades were worn with seemingly no bracers.[3]

At some point after reclaiming his rank as Mentor, Altaïr wore yet another set of robes prior to the Mongol assault of Masyaf.[3]

The robes were strikingly similar to Altaïr's previous set in terms of shape, and once more they featured a hood, though this time with the beaked tip and a full length cape, though it was grey with a red interior, instead of brown.[3]

The robes were white, and appeared clean and well looked after, in stark contrast to his previous set. The robes also appeared much more ceremonial, having ornate patterns and different colors. The robes had no visible equipment pouches or armor, and the Hidden Blades were equipped without bracers.[3] 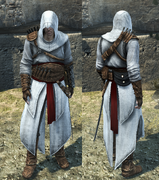 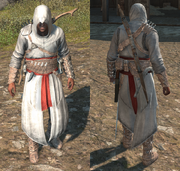 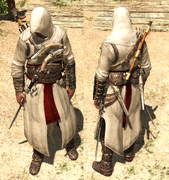 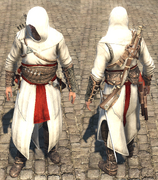 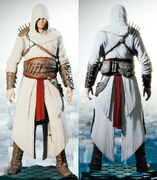 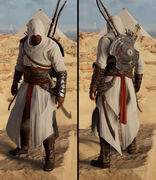