Ali Al-Ghraib (died 1341) was a young Assassin from the Egyptian Brotherhood and a disciple of Numa Al'Khamsin.

In 1340, Ali accompanied his master in the quest to regain the Scepter of Aset from the Templars. After he and Numa had traveled to the Island of Philae and obtained information about the Scepter, they headed for Cairo, where the Scepter had been stolen.[1]

On the boat, while Numa was in the process of examining his only clue, Ali had the idea to puzzle the dagger fragment together and discovered an emblem, showing it to his master on a drawing, Numa easily recognized it as the Templar cross.[1]

Two days later, Numa went to a Hammam in search of information about the Scepter. Ali however, gathered information on the rich merchant Bachir Al-Djallil during the day.[1]

As night fell, Ali followed Numa, who was eavesdropping on a conversation. Numa then caught Ali sneaking up on him and asked why the young boy had followed him. As a response, Ali showed his impatience to learn more from his master by blackmailing Numa into a trade: the promise of taking him to the merchant's residence in exchange for the information that he had gathered on Al-Djallil. Although feigning outrage, Numa accepted the trade and Ali explained that Al-Djallil was a wealthy silk merchant who was also infamous for having raped and killed dozens of girls with complete impunity.[1]

Witnessing the departure of his former target, Numa jumped to the roof of the house and entered the estate and thus breaking his promise to Ali. Inside, Numa threatened and tortured Al-Djallil, forcing the merchant to declare that the Templars and the Scepter were on their way to Karnak, after which a disgusted Numa killed him.[1]

In 1341, Ali and his master sailed for Karnak, to search for the Scepter of Aset. On their journey the two discussed the recent murder of the Sultan Al-Nasir Muhammad and how the Templars played a part in it. Arriving at night near the Temple of Amun, the two walked across a village, when Ali noticed a man wearing a dagger with the Templar cross on it. After telling this to his master, Ali started a fire as a distraction, so that Numa was able to look for the Scepter of Aset unnoticed.[2]

However, the distraction was not effective and Numa became surrounded by Templars. While the Assassin engaged in battle with his enemies, Ali stole the ankh-shaped box containing the disassembled Scepter from the Templars. Ali and Numa then fled from Karnak, taking the artifact with them.[2]

Subsequently, Numa returned to the Sultan’s palace in Cairo and tasked Ali to safeguard the Scepter and wait for his return in the Temple of Edfu. Although the Sultan’s Emirs expected Numa to hand over the artifact, the Assassin did not trust the Emirs and told them the artifact would remain in Assassin hands until a dignified successor to the throne would be presented. The Emirs interpreted Numa’s words as an insult and locked him up in a prison cell. Numa shared his cell with a woman named Leila, a Templar agent who claimed to have murdered Sultan Al-Nasir Muhammad. Eventually, the two work together to escape the palace. [2][3]

While Numa was in prison, Ali continued to guard the Scepter of Aset in Edfu Temple. Upon his return, Numa jokingly surprised Ali and praised him for his loyalty to the Brotherhood. Numa then explained the events that happened in Cairo, before noticing the bandaged wrist of Ali. While Ali explained that he fell and had broken his wrist, a group of hooded Templars surrounded them and Numa told Ali to flee, but the boy told his master that all the issue were guarded. Numa asked him how he knew and Ali told him that the Templars had tortured him, breaking his wrist and that he cracked, agreeing to help them eliminate his master in exchange for his life.[3]

The leader of the Templars came forward and revealed that the Scepter was not anymore the only priority of the Order and that Numa was such a nuisance that his death was now a new priority. Lowering her hood, the chief of the group turned out to be Leila, who told El Cakr that she felt no hate toward him but had to follow orders before she began dueling with him. While the two engaged in combat, Ali secretly put the disassembled Scepter under his bandaged wrist, leaving the ankh-shaped box empty. Thereon, Leila stabbed Numa into his heart, instantly killing him under the eyes of a distraught Ali.[3]

Leila, keeping her promise to spare Ali, then let the shaken Assassin apprentice go. But Ali, even if he had betrayed his master, was still loyal to the Brotherhood and threw the Scepter in a well near Edfu with the intent to contact the Brotherhood and come back later, but died a few weeks later of food poisoning, from eating tainted meat. Also, at some point before his death, while still a young boy, Ali fathered a child with an unknown woman.[3]

Ali is an Arabic name derived from عَلِيّ‎ ('aliyy), which literally means "high" or "elevated". Ghraib is a loose spelling of the Arabic term غُرَاب (ḡurāb), which translates as "crow, raven".

Along with Lugos and the unidentified Assassin who gave the Scepter of Aset to the Mamluks in 1250, Ali Al-Ghraib is the third known ancestor of Stella Crow, a non-canon modern-day Assassin. 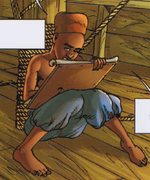