House of Agiad
Cult of Kosmos

Alexios (451 or 446 BCE – 422 BCE), also known as Deimos, was a member of the Cult of Kosmos, a organization based in ancient Greece and a Tainted One.

Alongside his half-sister, the famed misthios Kassandra, he was the grandson of King Leonidas I of Sparta through his mother, Myrrine.

Born to Myrrine and Nikolaos during the mid 5th century BCE in Sparta, Lakonia, Alexios was the younger half-sibling of Kassandra and a grandson of King Leonidas I of Sparta.[2]

Not long after his birth the Pythia at the time, Praxithea, gave a prophecy that the grandson of Leonidas would lead to the downfall of Sparta. It was unknown to those involved at the time that the "prophecy" had been concocted by the Cult of Kosmos in order to cull the bloodline of Leonidas, as retribution for his defiance decades earlier,[3] so despite his regal blood, the Elders of Sparta demanded the boy's death: to be thrown from the summit of Mount Taygetos.[4]

Alexios survived his planned execution due to the actions of his elder sister, Kassandra, who intervened and caused the death of a Spartan elder – which in turn led to her being thrown from the mountain by her step-father, Nikolaos.[4] Alexios himself was found, badly injured and near death, by Myrrine and taken to the Sanctuary of Asklepios in Argolis for healing.[5]

Whilst in the Sanctuary, Alexios was identified as a descendant of Leonidas–one who possessed the power of the gods–by Chrysis, a member of the Cult of Kosmos, and kidnapped. He was secreted away and Myrrine was tricked with the body of a similar child who had recently died.[6]

Weapon of the Cult

"The Cult is nothing without me. Even the gods cower in my wake. Kneel or die."
―Deimos[src]

Under Chrysis' care, Alexios grew up to become a weapon of the Cult and was named Deimos, after the Greek god of terror, in order to inspire fear in the Cult's enemies.[7] For the next fifteen years, Alexios served at the Cult's behest until, in 431 BCE, his first true test came in the form of his estranged sister.[8]

With the knowledge that his sister was alive, the Ghost of Kosmos manipulated Deimos into casting aside any feelings of love and to not believe anything "the other child of the bloodline" said to him. He was not instructed to kill her, but rather to give her pain.[9]

In 431 BCE, Alexios interrupted a Cult conclave in the Sanctuary of Kosmos to reveal that one of their cultist, Elpenor, had been murdered. Alexios accused that one of them was a traitor, and demanded each in turn place their hand upon the Pyramid so that he might know their true intentions. It was at this point that Alexios first came into contact with Kassandra, who had infiltrated the conclave disguised as a Cultist.[10]

Recognizing Kassandra's memories of Mount Taygetos and her murder of Elpenor, Alexios demanded to know who she was, quickly realising she was his sister. Confused and enraged, he allowed her to leave and summarilily executed the next Cultist to touch the Artifact.[10] Shortly thereafter, he pursued Kassandra to the island of Andros, and there accused her of throwing him from Mount Taygetos when he was a child; a charge Kassandra denied. He then departed, angrily.[11]

Two years later, in 429 BCE, Alexios struck at the heart of Athens. During the midst of a great plague, Alexios hunted down and murdered Athens' leader, Perikles, in order to weaken the city's standing in their conflict with Sparta and pave the way for Kleon, a Sage of the Cult of Kosmos, to take power.[12]

In 425 BCE, Deimos took part in the Battle of Pylos on the side of Kleon's Athens. There, he engaged his sister in combat, with her having joined sides with Sparta's Peloponnesian League at the behest of Brasidas, a commander in the Spartan army. During the battle, Alexios was very nearly killed by a falling tree before being pushed to relative safety by Kassandra.[13]

When Kassandra awoke, she found herself imprisoned in Athens and Alexios, standing outside her cell, ready to confront her. Kassandra once again attempted to reconcile with Alexios, but was rebuffed. Alexios also verbally challenged Kleon's presumption of power of him.[14]

Some time later, Deimos interrogated and tortured the scultor Phidias for information on three mysterious symbols. Following out the order that Brison could not finish. The only things Phidias was able to say about them was "Itira! Korgath! Metin!" for that was all he was able to glean in the short time he had studied them. Unsatisfied with his constant blubbering, Deimos beat the sculptor to death.[15]

Three years later, in 422 BCE, Alexios and Kassandra once more met each other on the field of battle at Amphipolis, in Makedonia. There, Alexios killed Brasidas, impaling him on his own spear, before engaging his sister in combat. The duel looked to be going Alexios' way when, suddenly, he was mistakenly struck from behind by an arrow fired by Kleon. Kassandra subsequently pursued and assassinated Kleon, before returning to the battlefield to find Alexios gone.[16]

Myrrine: "Think of what could lie ahead for us. A family as we were meant to be."
Alexios: "I cannot be what you want me to be. The weeds burrow too deep."
―Alexios' final words, 422 BCE.[src]-[m]

Sometime after the battle at Amphipolis, in the August of 422 BCE,[1] Alexios made his way to Mount Taygetos, in Sparta, to challenge his estranged family one final time. It was here that Alexios was confronted with the truth of his actions, and the manipulations of the Cult over his entire life.[17]

Despite Myrrine and Kasandra's pleas, their words fell on deaf ears, for Alexios' convictions would not change; he knew that he could not change for them. Striking out at his mother with a concealed blade, Alexios found himself impaled on his grandfather's spear, wielded by his sister, and died.[1]

In 2018 when Layla Hassan relived the memories of Kassandra via a degraded genetic sample found on the Spear of Leonidas using her Animus HR-8.5, it simulated an alternate version of events. In it Kassandra could save her brother, leading to him surviving beyond his historical death on Mount Taygetos and joining the crew of the Adrestia, alongside Myrinne, Nikolaos, and Stentor. Alternatively, Deimos could kill Myrrine leading to Kassandra killing him again.[17]

As Deimos, Alexios possessed a messiah complex, believing himself to be a demigod due to his Isu blood, someone who would bring order to the Greek world. Due to his harsh upbringing by the Cult of Kosmos, Deimos displayed almost no empathy for anyone and a strong lust for violence and warfare. His nature was extremely intimidating, to the point where even the Cult feared his unpredictable wrath.[10]

However, beneath his exterior was an emotionally broken individual who finally snapped out of the Cult's brainwashing when Kassandra handed him her Spear as a reminder of their shared bloodline to King Leonidas. It was after this gesture, that Alexios broke down into tears for all the violence he had committed and was happy to be reunited with his family once again.[17]

Thanks in part to his bloodline, and the Isu sword he possessed, Deimos displayed powerful feats in combat. He is able to thrust his sword into the ground to release blasts of energy and can even project beams of energy from the tip of his sword. His combat prowess was so vast, that was even able to brutally massacre Brasidas, a highly skilled and experienced Spartan warrior within a few seconds as well as go toe-to-toe with Kassandra and her Spear.[13][17]

Alexios, Αλέξιος, is an Ancient Greek name meaning 'defender'. Deimos, Δεῖμος, meaning 'dread', was also the name for the deification of terror, regarded as the son of Ares and Aphrodite and the twin of Phobos, 'fear', in Greek mythology.

Alexios bears numerous similarities to Deimos from the God of War franchise: 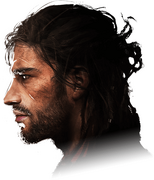 Concept art of Alexios as Deimos

Render of Alexios with no helmet

Render of Alexios with helmet

Retrieved from "https://assassinscreed.fandom.com/wiki/Alexios?oldid=856568"
Community content is available under CC-BY-SA unless otherwise noted.