Assassin's Creed Wiki
Register
Don't have an account?
Sign In
Advertisement
in: Articles that need updating, Port cities, Cities in Egypt,
and 3 more

"Alexandria is where the whole world meets, where every language under the sun is spoken on its streets, where Greeks and Egyptians walk together, where the Jews have their own temples even—and scholars from around the world come to study at the great Museum and Library."
―Amunet[src]

Alexandria is the third largest city of Egypt, located along the coast of the Mediterranean Sea. It is named after the Macedonian king Alexander the Great, who founded the city around 331 BCE. A Hellenistic city, it served as the capital of Egypt throughout the Ptolemaic dynasty. It had so much commercial and intellectual development, that it became the most flourished city of the Ptolemaic era.

Founded by Alexander the Great in 331 BCE, the polis of Alexandria was incorporated into the fledgling kingdom of Ptolemy I Soter in 323 BCE. During that year, Ptolemy hijacked the sarcophagus of Alexander, which was on its way to Macedonia at the time, and later buried the king in a tomb in the city. Sometime during the reign of Ptolemy XII Auletes, an earthquake struck the city, causing considerable damage to Alexander's tomb.[1]

In 49 BCE, the pharaoh Cleopatra was exiled by her brother and co-ruler, Ptolemy XIII with the help of the Order of the Ancients. Apollodorus, one of Cleopatra's loyal followers, helped her to escape the city through the canals.[2]

A year later in 48 BCE, Aya, seeking revenge for the death of her son Khemu, killed two members of the Ancients, Actaeon, and Ktesos.[3] Following this, her husband, the Medjay Bayek killed another member, Eudoros, in the bathhouse of Alexandria.[4]

In September, the Roman general Julius Caesar travelled to Alexandria in pursuit of his rival Pompey, who had fled to Egypt. There, Caesar was received by Ptolemy XIII, who presented the head of the deceased Pompey to the general. Their meeting was interrupted with the arrival of Cleopatra with the help of Aya, Bayek and Apollodorus.[1]

At the beginning of the year 47 BCE, Ptolemy besieged the city with his army in an attempt to trap Cleopatra and the Romans. Bayek and Aya helped Caesar to defend the city.[5]

In 30 BCE, the Roman army led by Octavian invaded Alexandria.[6] Cleopatra watched as the Roman army approached as her son Caesarion trained with the guard. Getting beaten, Cleopatra told her son that he must remain strong.[7] With Octavian's men closing in, Cleopatra, Caesarion, and their guard walked outside. Once the guard left they were attacked, Caesarion bravely defended his mother who encouraged him to kill them attacker. Deducing that their guard had betrayed they waited for his return and killed him too.[8] Aya, now known as the Hidden One Amunet, confronted Cleopatra in her palace. Amunet handed her a vial of asp extract, allowing her to commit suicide, promising Cleopatra to take her son Caesarion, with her to Rome and train him as one of them.[9][10]

In 295 CE, the Roman Emperor Diocletian attacked the city, which fell after eight months of relentless assault.[11]

In 357, Constantius II had an obelisk built by Thutmose III in Karnak pilfered and transported to Alexandria. After remaining there for 40 years, Emperor Theodosius I transferred it to Constantinople.[12]

During the 1240s, the widow of the Assassin Sef Ibn-La'Ahad moved to the city with their children, after having spent some time in exile in Alamut.[13] In 1257, Sef's brother Darim moved to Alexandria to be with his family, after the Mongols started besieging the Assassins' fortress of Masyaf.[14]

Years later, a descendant of Altaïr named Iskender became the Mentor of the Assassins in Egypt and was headquartered in Alexandria.[15] The Templar Odai Dunqas also relocated to the city sometime around 1505, after being driven away from his home by his family.[16]

In 1511, during an excavation of the destroyed Library of Alexandria, the Mamluk Sultanate's soldiers discovered two Memory Seals in a chest from 331 BCE. Ezio Auditore sent some Assassins from Constantinople to Alexandria to retrieve the seals.[17] After the seals were recovered, Templar soldiers launched an offensive on the Assassin headquarters. The Assassins fought hard to protect the initiate decoding the seals.[18] However, the Templars later reacquired the seals. A search party was sent out, authorized to use maximum force.[19]

Sometime later, The Egyptian Mentor Iskender was captured by Templars and scheduled for execution, Ezio sent some Assassins to save him from his demise.[15]

The rich district houses have wall paintings that are actually characteristic of Roman wall painting.[20] The in-game patterns resemble the ones found on the terrace houses of ancient Ephesus. The city has Roman style raised stone pedestrian crosswalks.

Concept art of an overview of Alexandria

Sailor suburb in the city 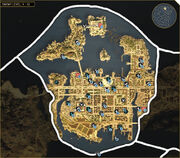 Alexandria at night as seen from the Serapeum