Assassin's Creed Wiki
Register
Don't have an account?
Sign In
Advertisement
in: Articles in need of sources, 356 BCE births, 323 BCE deaths,
and 15 more

Alexander III of Macedon (356 BCE – 323 BCE), commonly known as Alexander the Great, was a King of Makedonia who conquered the Achaemenid Empire. For this act, he is heralded as one of the most successful conquerors in history.

Alexander the Great's empire was backed by the Order of the Ancients, who had entrusted him with a Staff of Eden, explaining why Alexander was able to become so successful and undefeated.[2][3] In addition to the Staff, which reinforced his rule, Alexander wielded the Trident of Eden in battle.[4]

During his successful conquest of the Achaemenid Empire, Alexander and his Macedonians entered Egypt, freeing the land from Persian influence and being saluted as liberators by the populacy. There, Alexander also visited the Oracle of Amun in Siwa, which prophesied his exploits and hailed him as Son of Ammon.[5]

Alexander also attempted to conquer the region of Cappadocia in Central Anatolia, but failed due to his lengthy military campaigns. Instead, an autonomous and independent kingdom was instead established, led by its own king outside of Alexander's kingdom.[6]

Around 330 BCE, Alexander discovered the Herat Temple, an ancient temple built by the Isu, in Herat, Afghanistan. He built the Herat Citadel atop its remains.[7]

After conquering the Achaemenid Empire, Alexander set out to take over the Punjab region of India. In the area between the Jhelum and Chenab Rivers, he encountered a prince named Porus in what would become known as the Battle of the Hydaspes. Despite the Punjab force's numerical superiority, including 200 elephants, Alexander's troops flanked Porus' left side. The maneuver caused the elephants to panic, and Alexander's highly mobile cavalry proved too strong for the Punjab force. Presumably impressed with Porus' military elegance and spirit, Alexander allowed him to retain his kingdom after the battle. Porus became an ally and subordinate ruler of Alexander, until sometime between 321 BCE and 315 BCE, when he was assassinated by Eudemus, one of Alexander's generals.[1]

During his reign, Alexander had created one of the largest empires in the world, and created a new Hellenistic civilization by leaving Greek colonists in his conquered lands. As he continued his conquest of Asia, a group of proto-Assassins realized that Alexander's success could not be caused by military prowess alone, suspecting that he held the Staff.[1]

Thus, in 323 BCE, the proto-Assassin Iltani infiltrated the palace of Nebuchadnezzar II, where she poisoned Alexander.[8] Alexander died of the poisoning, and his empire soon began to crumble.[1] His body was interred alongside his Staff of Eden in a tomb in Alexandria, the city in Egypt that he founded.[9] The three prongs of his Trident of Eden were split after his death amongst his generals, including Seleucus and Ptolemy.[4]

In 48 BCE, Aya and Bayek found the Tomb of Alexander the Great to help Cleopatra impress Julius Caesar. This allowed Caesar's ally Flavius Metellus, a Roman general and leader of the Order of the Ancients, to take Alexander the Great's Staff of Eden.[10] Following the Battle of the Nile, Cleopatra was crowned queen and possessed Alexander's Staff.[11]

In 2012, Alexander was one of many historical people included in the Glyph puzzles the late Assassin Clay Kaczmarek had left behind in the Animus as messages for his successor Desmond Miles to decipher. Desmond solved the puzzle, which was part of a set titled "Instruments of Power", in September of that year[12] and learned Alexander was excluded from the list of historical individuals Clay revealed to have wielded Swords of Eden. Alexander was, however, included in the list of historical individuals revealed to have wielded a Staff of Eden, showing how old the Templars' influence on ancient history was.[13]

The portrait of Alexander by Rembrandt used in the fifth Glyph puzzle of Assassin's Creed II is erroneously attributed to the Macedonian, as it is instead a portrait of Pallas Athene. The false identification is a common occurrence by scholars.[14] Rembrandt's painting Man in Armor, painted the same year 1655, bears the most resemblance to Alexander.[15]

According to the semi-legendary Alexander Romance, he was described as having heterochromia iridum,[16] a common characteristic among Sages of Aita.[17]

Alexander the Great by Rembrandt 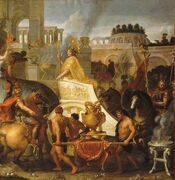 Entry of Alexander into Babylon by Charles le Brun

Alexander during the Battle of the Hydaspes

Alexander's sarcophagus in his tomb

Top view of Alexander's sarcophagus and his Staff of Eden