This Staff of Eden was a piece of leftover Isu technology, one of the three known Staves of Eden.

The Staff was originally under the ownership of the Order of the Ancients, who gave it to the king of Macedonia Alexander the Great alongside a Trident of Eden. Having the possession of these two Pieces of Eden, Alexander was able to remain undefeated and create one of the largest empires in the ancient world.[1]

Eventually, the proto-Assassin Iltani infiltrated the palace of Nebuchadnezzar II, where she poisoned Alexander and destroyed his empire.[2] His body was interred alongside his Staff in a tomb in Alexandria, the new city he founded in Egypt following his conquest of the land and which had become the capital of Ptolemy I Soter's new kingdom after Alexander's death.[3]

In 47 BCE following the end of the Battle of the Nile, the leader of the Order of the Ancients Flavius Metellus took the staff from Alexander's tomb. Traveling to Siwa with fellow member Lucius Septimius, the two members combined the staff with an Apple of Eden to access the Isu Vault hidden beneath the city's temple and activate its holographic mechanism, with them bowing to the mechanism alongside their Roman legionaries.[4] After learning of the vault's contents, Flavius took the apple with him to Cyrene[5] while Septmius took the Staff and traveled to Rome.[6]

While Bayek hunted down and killed Flavius Metellus for the murder of his son and recovered the Apple, Aya pursued Septimius to Rome. On 15 March 44 BCE, Aya confronted and defeated Lucius Septimius at the Theatre of Pompey where she demanded to know where Alexander's Staff was. The dying Gabiniani revealed to her that he had given it to the Order in Rome.[6]

During the 19th century, the Templar Alexander Burnes searched for the staff in Afghanistan.[7] 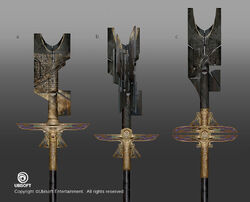 The staff with Alexander's sarcophagus 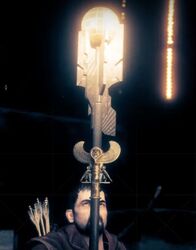 Flavius wielding Alexander's Staff
Add a photo to this gallery

Retrieved from "https://assassinscreed.fandom.com/wiki/Alexander%27s_Staff_of_Eden?oldid=849899"
Community content is available under CC-BY-SA unless otherwise noted.