"These converts are our foothold in this country."
―Alessandro Valignano.[src]

Alessandro Valignano (1539 – 1606) was an Italian Jesuit missionary and a Templar, who helped supervise the introduction of Catholicism in the Far East, most specifically in Japan.

While he was sent to aid Francisco Cabral in 1579, who was already doing missionary work in Japan, the two men despised one another almost instantly. Valignano used his Jesuit connections to scour Japan for Templar recruits, and upon Francisco Cabral confronting Valignano regarding this, Alessandro used his influence to force Cabral to resign from his post as Superior of the Jesuit Mission.

Valignano during a sermon 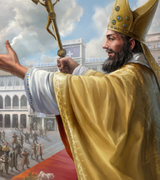