Assassin's Creed Wiki
Register
Don't have an account?
Sign In
Advertisement
in: Articles in need of sources, Articles that need updating, 1893 births,
and 11 more

"Family. Honor. These things are nothing next to the Templar Order. The one source of light in a midnight world."
―The Black Cross to Darius Gift, 1927.[src]

Albert "Albie" Bolden (born 1893), better known as the "Black Cross", was a Templar agent active during the early 20th century, who traveled around the world under the guise of the leading trumpeter in Albie Bolden and the Harlem Hotsteppers,[1] a touring night club jazz band.

As the Black Cross, Bolden was tasked with keeping the Grand Masters of the various Rites in line with the Templar Code and to eradicate any corruption of the Templar values. He was also known for his signature weapon, which was a bladed pin shaped as a black Templar cross.

Bolden was also the last known Black Cross until 2017 when Juhani Otso Berg took up the title.

Before upholding the family tradition of the Boldens and becoming simply known as the Black Cross, Bolden was a soldier part of the Harlem Hellfighters who fought in the trenches of World War I until he was injured by an explosion.[2] Before his departure for the front, Bolden sired a daughter with his wife.[2]

Role as the Black Cross

In February 1927, Bolden was sent to eliminate the British Grand Master Thaddeus Gift for stealing money from his fellow Templars and for using the good name of the Order to embezzle money. Tracking him across the streets of the city, Bolden eventually slit his throat and cut out his Templar ring finger.[2]

One month later, Bolden was sent to China to eliminate Yuri Dolinsky, who had abandoned the Order. Dolinsky was aboard the Templar-built train, the Great Wall travelling through Chekiang province to support the warlord Zhang Zongchang against Chiang Kai-shek, who was an ally of the Templars. Bolden confronted the Templar turncoat on the train and dueled against him, suceeding in killing him.[1]

In April, Bolden was playing with his band in Shanghai when he witnessed the arrival of Darius Gift in the club where he was playing. He followed Gift outside when the package he was supposed to deliver to the Shanghai Rite was stolen by a bar girl named Roo. From a nearby roof, Bolden observed two Frenchmen approaching Gift, believing that the newly arrived young man was the Black Cross, before deciding to intervene. Having rescued Darius, Bolden discovered that the men were actually French police. After exchanging pleasantries, Bolden promised to retrieve the absent package for Darius as he was ordered to offer aid directly by the Nine.[2]

Sometime later, Bolden eavesdropped on a meeting of the local Templar rite that discussed the struggles of holding Shanghai amidst gangsters and warlords. Word had reached them of Bolden's arrival, and that they were instructed to assist him in any way. One Templar, Joffre, hailed a taxi upon leaving the meeting, only to be lead to a quiet location to discover that the "driver" was the Black Cross himself. They discussed the Hop Wo Society, the name found upon one of the French police. Joffre pointed out that they were communists, and that the address was an amusement palace. Bolden infiltrated the building where one remaining Frenchman was under duress and seemingly was part of an ambush.[2]

Bolden released smoke bombs and attempted to escapes the through the amusement park, he used environmental opportunities to take down his pursuers. Until he came across Fiery Crow, during their fight, Bolden managed to stab him with his Templar pin, before being rendered unconscious. When he awakes he found himself face to face with Du Yuesheng, leader of the Green Gang Triad. Du mocked the activities of the Templar Order thus far in China, whilst Bolden attempted to discover the whereabouts of the box. The conversation turned to the poison of the Templar pin, at which point 'Fiery Crow' keeled over, freed once more. Bolden had planned to be captured, so that he could find out what Du really knew. He promptly grabbed his possessions and gunned his way out of the nearest window as he escaped.[2]

Bolden later investigated the servant of Madame Sun, earning himself a meeting with her. They discussed how she orchestrated the events to retrieve the box, and ultimately showed him the empty box. Sun revealed to the Bolden that it was the machinations of Chiang Kai-shek. He searched, and eventually kidnaped a convoy driver who he interrogated. Bolden discovered that they were ordered to kill an actress and a 'British Kid'. He later arrived and prevented Flowery Flag from finishing the job, The two men engaged in hand to hand combat until Flowery Flag pulled out a gun and shot him, hitting him in the shoulder. As Flowery Flag moved to kill Bolden, Ruan stabbed him in the back. Using the diversion, the Templar quickly wrapped his Templar Cross chain around Flowery Flag's neck before pushing him through a window. Flowery Flag was hanged with the chain. Darius fired a gun into the back of Bolden, citing vengeance for his father. Cross tried to protest that he did it for the order, but Darius fired multiple shots into him. Bolden stumbled and fell of a ledge, with a brief flash of his wife and child coming to mind.[2]

Bolden survived the fall and was brought to a local hospital, where he was treated. After the incident, Bolden failed to report to his superiors, which led to the Order sending Rufus Grosvenor, a high ranking member to find out what happened to him. A year later in a Chinese opium den in 1928, Bolden encountered Grosvenor, who attempted to blackmail him, threatening to reveal to the Order that he was alive if he did not gave him the Koh-i-Noor, but Bolden refused and left.[3]

Knowing that Grosvenor would track down the artifact eventually, Bolden travelled to Switzerland and retrieved it from the bank it was secreted in. For the next 9 years, Bolden kept the artifact with it throughout his journey to hid it from Grosvenor.[3]

Sometime in 1937, Bolden returned home to find his family murdered and the Piece of Eden stolen by Grosvenor. Vowing revenge, Bolden tracked the Templar for the next few months, eventually to Spain, where he finds Norbert Clarke, Ignacio Cardona holding the Koh-i-Noor and a group of Spanish Assassins in the Assassin hideout. As Cardona pass out due to the usage of the Piece of Eden, Bolden attacked Nobert Clarke and the Assassins which caused him to suffer several bullet wounds. Unable to get close to Gorsvernor, Bolden took the unconscious Assassin instead and escaped to a unknown location.[3]

At the hideout, Cardona regained conscious as Bolden was patching up his wounds. Bolden revealed himself as a Templar and the Black Cross which led to the Assassin attacking him. Bolden easily subdued him and explained to him of his 'death' in Shanghai, how he encountered Grosvernor and tracked him to Spain. He revealed that the Assassin Norbert Clarke was actually Grosvernor, who had killed him earlier and posed as him. He also tells Cardona that Grosvernor was planning to use him as a conduit for the Koh-i-Noor and unleash its powers. Bolden asked Cardona to help him track down Grosvernor, in exchange for helping him to warn his cell, which he accepted.[3]

Bolden and Cardona rode along with several Spanish revolutionaries and a while later, they come across Grosvernor, with the Assassins behind him.[3]

In 2013, Juhani Otso Berg watched the memories of Darius Gift in order to learn more about his encounter with the Black Cross. Indeed after Berg's mission in India, the Templars discovered that Bolden was the last recorded individual in contact with the Koh-i-Noor.[2]

After witnessing Bolden fall from a temple roof, having been shot multiple times by Gift in 1927, Berg told Violet da Costa that despite the evidence, he wasn't sure that the Black Cross truly died that day. Bolden's family disappearing from the records after his departure for WWI, Berg put the search for the artifact on stand-by, hoping that the Order would find one of Bolden's descendants to further explore the Black Cross' memories.[2]

The Black Cross' last mission in Shanghai was later used as the template for one of Abstergo Entertainment's games on the Helix platform, "Showdown in Shanghai".[2]

In 2017, Berg relieved Bolden's memories during his time in Spain during the Spanish Civil War in order to locate the Koh-i-Noor.[3]

Albert Bolden was a capable freerunner and climber, able to scale buildings in London and China. He was also a skilled tactician, allowing Thaddeus Gift to get to a phone to reveal his collaborators,[2] and accounting for Yuri Dolinsky's superior sword-fighting skills by cutting the tracks of the train prior to their duel on board, causing Dolinsky to fall and lose his advantage.[1] Bolden was a trained soldier and was a skilled marksman knowledgeable with many firearms.[2]

Albert was also highly skilled in unarmed combat, besting many opponents in the crime syndicate the Green Gang, such as the large Fiery Crow, and holding his own against the skilled Flowery Flag. Even while injured, he outmatched a rage-filled Ignacio Cardona four times. He could take down multiple opponents in close-quarters combat, such as when fighting multiple soldiers at once in the Great Wall or when he faced off against an entire Assassin cell, although he was forced to retreat. This was only of minor concern to him, however, as by his own admission he had eliminated entire cells singlehandedly. He was also exceptionally skilled in stealth, constantly sneaking up on those he had to interrogate or execute. He was fluent in Chinese.[2]

In terms of equipment, Albert carried a bladed pin as his primary weapon; he had two poisons for it, one fast and another that took hours or so to set in. He also carried a sword on occasion and possessed what appeared to be a kind of chain dart, along with smoke bombs, grenades, a sub-machine gun and a gas mask.[2] 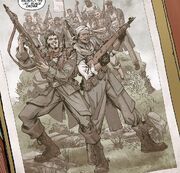 Bolden and Cardona during the Spanish Civil War