In 1341, after being seduced by his servant Leila, a secret Templar agent, Muhammad was assassinated by her in his own palace in Cairo, to stop the Sultan's oppression.[1]

Muhammad being stabbed by Leila 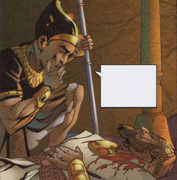