Assassin's Creed Wiki
Register
Don't have an account?
Sign In
Advertisement
in: Articles that need updating, 1455 births, 1526 deaths,
and 9 more

Aguilar de Nerha (1455 – 1526) was a Master Assassin and Mentor of the Spanish Brotherhood of Assassins. He is an ancestor of Callum Lynch through the maternal line.

Aguilar played a prominent role in the Brotherhood's fight against the Spanish Inquisition, who acted under the direction of the Templars. He thwarted an attempt by the Grand Inquisitor and Master Templar, Tomás de Torquemada, to acquire an Apple of Eden in order to bring Spain completely under Templar control.

"His family were Assassins. They were burned at the stake by the Templars, Torquemada... and the black knight you saw, Ojeda."
―Sofia Rikkin to Callum Lynch on Aguilar's past, 2016.[src]

Aguilar was born in 1455 to two members of the Assassin Order. Despite this, Aguilar did not officially join the Spanish Brotherhood until his parents were burned at the stake by Tomás de Torquemada and Ojeda as part of the Inquisition.[1] Even so, he was initially rejected by the Brotherhood, as they felt he was too angry and full of vengeance to properly begin training. Eventually, the Brotherhood's Mentor Benedicto and Master Assassin Maria saw something in Aguilar and convinced the Brotherhood to accept him. During his childhood, Aguilar was a close friend of Máximo Barrosa, whom he later recruited into the Brotherhood after his own training.[2]

Aguilar was trained by Mentor Benedicto before being formally inducted into the Order in 1492. As part of the ceremony, he had his ring finger ceremonially amputated as was the tradition among the Levantine Assassins.[1] During his training, Aguilar also grew close with his sparring partner, María, and the two began a romantic relationship.[3]

Aguilar's first mission was to spy on a meeting between Torquemada and his top enforcer, Ojeda, during which he learned that King Ferdinand II of Aragon and Queen Isabella I of Castile had given command of the Spanish army to the Grand Inquisitor and that the Templars were about to set a new plan in motion. Meeting with María, the senior Assassin tasked Aguilar to gather other Assassins and set a new base of operation in an abandoned fortress of the Sierra de Cazorla, from which the Assassins harassed the Templars.[4] In line with this mission, Aguilar also investigated and pursued the Inquisitor, Gustavo Ramirez, hoping to eliminate him. However, Ramirez always seemed to be one step ahead of the Assassins and continued to elude Aguilar and the other Spanish Assassins.

Later, the Spanish Assassins tried to ensure the safety of Prince Ahmed of Granada, the son of Sultan Muhammad XII of Granada, whom the Templars were searching for in order to use as a ransom for the Apple of Eden they knew to be in the Sultan's possession. Together with María, Benedicto, and a number of other Assassins, Aguilar ambushed a Templar force led by Ojeda in a small Andalusian village where the Prince had been hiding, eliminating Ramirez in the process.[1]

Despite the Assassins being outnumbered and eventually overpowered, both Aguilar and María managed to escape the village with the Prince, though they were quickly pursued by Ojeda and a number of his soldiers. The pursuit lasted some time, but eventually Aguilar, Maria, and Benedicto were apprehended and imprisoned by the Templars.[1]

Following their arrest, the surviving Assassins were transported to Seville, where they were denounced as heretics and sentenced to be burned at the stake by Torquemada. In the presence of the king of Aragon and Queen of Castile, Aguilar watched as Ojeda lit the pyre beneath Benedicto’s feet, burning him alive. Despite this, however, Aguilar was able to escape his bonds and engaged the Templars as they closed in. He also freed María and together, the two Assassins made their escape through the streets of Seville.[1]

Once more pursued by Ojeda and his soldiers, this time across the rooftops of the city, the Assassins made their way to Seville Cathedral, which was under construction at the time. They managed to eliminate many of their Templar pursuers in the process, before finally making their escape by climbing the cathedral’s scaffolding and performing a Leap of Faith into the streets below.[1]

On 2 January 1492, at the urging of the Italian Assassin, Ezio Auditore da Firenze—who also happened to be in Spain at the time—Muhammad XII surrendered his capital, Granada, to Torquemada's forces.[5] As the Templars entered the city both Aguilar and María made their way to the Sultan's palace, watching from above as the Sultan reluctantly handed over the Apple in exchange for his son's safety before they made their move.[1]

Dropping smoke bombs into the room, both Assassins quickly eliminated many of the Templars, before Aguilar captured Torquemada and claimed the Apple. Unfortunately, Ojeda had managed to apprehend María. Now in a stand-off, Ojeda promised to release Maria once Aguilar returned the Apple to Torquemada. Aguilar reluctantly agreed, but before he could act, he witnessed María take her own life with Ojeda's blade to prevent him from betraying the Creed to save her life.[1]

Enraged by her death, Aguilar engaged Ojeda in combat but was gradually overcome by his opponent's sheer strength. It was only after he had been knocked to the ground that Aguilar managed to gain the upper hand. In her final breath, she signaled to Aguilar and using her launchable Hidden Blade, struck Ojeda in the chest, giving Aguilar the advantage he needed to defeat and kill him. With Ojeda dead, a heavily wounded Aguilar was forced to make his escape through the tunnels beneath the palace as Torquemada opened the locked door of the room to the rest of his men.[1]

Escaping through the tunnel and making his way outside to a bridge, Aguilar was eventually surrounded. Torquemada stood above him, trying to convince him the fight was over and he should surrender the Apple of Eden, but once more he escaped by performing a Leap of Faith into the river far below.[1]

Securing the Apple and later years

After the events in Granada, Aguilar realized that the Apple would never be safe from the Templars if it remained in Spain. He made his way to Palos de la Frontera in Huelva, where he charged Christopher Columbus, an ally of the Spanish Assassins, with protecting the Apple.[1]

Aguilar's actions ensured the Apple of Eden would remain hidden from both humanity and the Templars for many centuries, having given it to Columbus who kept the Apple with him until his death.[1]

In 2016, Abstergo Industries began a search for the Apple, which they believed to have been buried with Aguilar. To this end, they searched his burial site but were unable to find it. The Templars recovered his equipment in the process and brought them to the Abstergo Foundation facility in Madrid.[1]

In October of the same year, Abstergo located the last known descendant of Aguilar, Callum Lynch, who was currently a death row inmate in Texas, and had his execution by lethal injection faked so they could appropriate him to relive his ancestor's genetic memories through the Animus 4.3. Lynch was outfitted with Aguilar's Hidden Blades (so as to enhance synchronization), and through several Animus sessions the location of the Apple was eventually revealed, causing it to fall into the possession of high-ranking Templar Alan Rikkin.[1]

At the end of the Animus session, Aguilar would appear as a ghostly vision to Callum along with his other Assassin ancestors, including Arno Victor Dorian and mother Mary Lynch, ultimately convincing Callum to embrace his Assassin heritage. Callum would then utilize Aguilar's equipment, assisted by fellow Abstego inmates Lin and Moussa, and was able to escape the facility, later assassinating Alan Rikken and reclaiming the Apple at a Templlar meeting in London.[1]

About the same year, Abstergo Entertainment uses the resources to make a downloadable content for Identity Project.[7]

Aguilar was a committed member of the Assassin Brotherhood, dedicated to preserving free will and fighting against the Knights Templar. He also possessed a deep understanding of the political climate in 15th century Spain and knew Tomás de Torquemada and the Spanish Inquisition had to be stopped.[1] Aguilar was a firm believer of the doctrine of Altaïr Ibn-La'Ahad, and followed his most fundamental teachings to the best of his ability.[8]

A capable fighter, Aguilar could handle himself against multiple enemies in both armed and unarmed combat, wielding a range of weapons including swords and spears with great skill. Additionally, he proved to be proficient at archery, using a bow and arrow to deadly effect in both long and close range combat.[1] Aguilar was also proficient with throwing knives, and when thrown could create opportunities for striking first. Owing to his agile reflexes, Aguilar could also strike twice in one attack.[8]

Like many Assassins, Aguilar was also adept in freerunning, being able to move across the rooftops of Seville quickly and creatively, ducking in and out of buildings and dashing across ropes in an effort to lose his pursuers. He also mastered the Leap of Faith, using it on at least two occasions to escape his enemies.[1] In addition to freerunning, he could also use construction lifts to propel himself to higher ground, navigate ziplines to reach lower ground, and climb walls.[8]

Equipment-wise, Aguilar possessed dual Hidden Blades as his primary weapons, one of which was equipped with a grappling hook. He also had a dagger, throwing knives, and smoke bombs at his disposal.[1] With his Hidden Blades, he could assassinate enemies from the air or from concealed hiding spots.[8] As Mentor of the Spanish Brotherhood, Aguilar possessed a personal sword he used in combat.[9] The robes Aguilar wore showed Moorish influences, being adorned with beads and embroidery.[10] 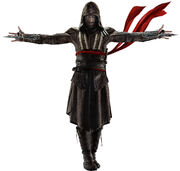 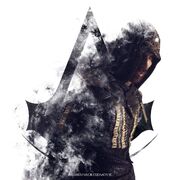 The concept art of Aguilar de Nerha in Identity

Aguilar as he appears in Rebellion