Agamemnon was a king of Mycenae in Greek mythology. Together with his wife, queen Klytaimnestra, Agamemnon fathered Iphigenia and Orestes. He was also the brother of Menelaus, who reigned as King of Sparta.

Agamemnon was prominently featured in the works of Homer; the Iliad and the Odyssey. The authors Euripides and Sophokles also wrote of him.

In most Greek mythology traditions, Agamemnon was best known for being the commander of the united Greek forces during the Trojan War in the 12th century BCE, a war fought against Troy after Menelaus' consort Helen was kidnapped by the Trojan prince Paris.[1]

When Agamemnon's ships were immobilized by the goddess Artemis on their way to Troy, Agamemnon sought to appease the goddess by sacrificing Iphigenia. However, the goddess intervened, pitying the girl and replaced her with a doe.[2]

Upon returning from the war with mounds of treasure and the Trojan princess Cassandra as a concubine, Agamemnon was either killed by his wife while he bathed or her lover, his cousin Aigisthos at his homecoming banquet.[1] He was subsequently buried in a tomb connected to Mycenae nearby.[3]

In a simulation of the Underworld created by the Isu Aletheia, Agamemnon's soul resided in a vault connected to the Pit of Deprivation in the Chasm of Torment. He met the Spartan misthios Kassandra, who was sent by Hades to recruit him as a guardian of the Underworld. After being defeated by Kassandra, Agamemnon agreed and travelled to the Gate of the Unbowed to defend it.[4]

During the Classical period, Agamemnon was referred by the Cult of Kosmos as the first servant of Kosmos, the Cult's ideal of peace through order. Because of this the Worshippers of the Bloodline sought to resurrect him.[5] However, when that failed the Sage of the Eyes of Kosmos branch, Nyx the Shadow, sought to remove all traces of Agamemnon and his lineage from the history books. This task was given especially to Midas, a Cultist active in Argolis.[6]

In addition, Agamemnon's own personal armor, which he allegedly wore during the Trojan War, was recovered by the Cult of Kosmos and split amongst the members of the Silver Vein branch. During the Peloponnesian War, the misthios Kassandra eliminated the Cultists and recovered the armor for herself.[7]

In 1876, when archaeologist Heinrich Schliemann unearthed the circle grave of Mycenae he mistakenly attributed it to the Mycenaean King, and alleged that a gold mask he found inside was "The Death Mask of Agamemnon", however these claims were later debunked.[8]

Agamemnon was said to be a fearsome warrior on par with Achilles, but he was also an overly-ambitious and arrogant ruler. His determination and faith was so fierce, that he sacrificed his own daughter to convince Artemis to grant his ships passage to Troy. Despite his initial harshness and stubbornness as a leader, Agamemnon developed into a wise and confident leader.[1] The denizens of the simulant Underworld however, perceived Agamemnon to be nothing more than a thug with a blade.[9]

In the simulation of the Underworld, Agamemnon wore his personal armor set in combat and wielded a sword and round shield. He was capable of performing wide sweeping power attacks and also bashing his opponent with his shield.[4] 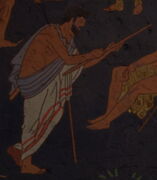 Agamemnon in the Pit of Deprivation

Agamemnon at the Gate of the Unbowed

The Quarrel Between Agamemnon and Achilles by Gaulli Giovanni Battista