"A chalice is merely a vessel for libation, for good or ill."
―Adha.[src]

Adha (died 1190) was a woman from the Levant who lived in the time of the Third Crusade. As the Chalice, a legendary "artifact" thought to have been hidden in the Temple of Sand, she was rumored to possess the mystery power to unite the factions of the war.

In 1190, the Chalice was sought after by both the Knights Templar and Levantine Assassins, unaware that it was a person rather than an object. After a Crusader expedition to the Temple of Sand turned out fruitless, she was located in Jerusalem and captured by the Templars. To her fortune, her friend, the elite Assassin Altaïr Ibn-La'Ahad was not far behind and rescued her.

Despite this, Adha remained mistrustful of the Assassins, in part due to a Templar spy embedded within their highest ranks. Guided by his love for her, Altaïr agreed to assassinate the spy, Harash, then flee the Assassins and Templars to settle for a normal life with her. In the end, this dream proved futile when Altaïr failed to save her after she was recaptured by the Crusaders and subsequently murdered.

"We need the Chalice. Something that powerful must be kept away from the dealings of men."
―Al Mualim to Altaïr Ibn-La'Ahad[src]-[m]

The Chalice was a fabled artifact which according to Al Mualim, could bestow its wielder the power unite all factions under them, granting them victory over all and allowing them to rule the Holy Land. Seeing the danger of such an artifact should it fall into the hands of the Crusaders or Saracens, the Mentor sent one of his Assassins, Altaïr Ibn-La'Ahad, on a mission to retrieve it in 1190.[2]

His search led him to the fabled Temple of Sand, where the Chalice was thought to have been hidden. It was there that, after discovering only an empty golden chest, he was ambushed by the Templars, whose leader Basilisk informed him that the Chalice was in fact a woman before leaving him to his doom.[2]

Altaïr survived the attack and the subsequent sandstorm that engulfed the temple. After pursuing Basilisk to Tyre and besting him in combat, he extracted the location of the Chalice from his enemy in exchange for mercy. However, the Templar also alerted him to a Crusader plot to poison the entire population of Acre to end the siege, knowing full well that Altaïr's conscience would force him to detour to Acre to stop this massacre.[2]

Though Basilisk had hoped Altaïr's preoccupation with Acre would allow his forces to capture the Chalice first, Altaïr had torched his fleet of docked ships, hindering his head start. Thus when Adha, the Chalice, was apprehended by three Templars at her hiding place in Don Carvaggio's villa, Jerusalem, her friend Altaïr was only moments behind. Her captors proceeded to escort her to the city gates, stalked by the Assassin on the roofs above. When Altaïr set off an explosion to aid in his navigation, the Templars began to suspect that trouble was following them. In response, Adha attempted to stall by slowing her pace and pleading for a rest, much to the fury of Sadad, one of her captors.[2]

As Adha was ushered into a sewage facility by the Templars, a great battle ensued as Altaïr burst into the Templar base. Even the elite Templars could not hold back the Assassin's advance, and soon enough all the soldiers holding Adha hostage were dead, save the sergeant Qasim who fled for his life. Separated from her savior by a channel, Adha was convinced by Altaïr to venture into the sewers where their paths might cross. She was wary of trusting an Assassin—even one she's had prior association with—but nevertheless relented when he promised not to abandon her.[2]

When they at last reunited at the exit of the sewers, Adha revealed why she feared to place her life in the hands of the Assassins. She had overheard from the Templars that they had bribed Harash, the Keeper of the Assassins, to serve as their spy. As long as their brotherhood remained compromised, it was dangerous for her to accompany Altaïr. Altaïr, though shocked by the news, placed his faith in Adha and agreed to assassinate the traitor. Knowing that he lacked hard proof of Harash's treachery, he predicted that such an act would also mean leaving the order altogether.[2]

It was then that the two, in love as they were, agreed to flee together to a faraway place, away from the conflict between the Templars and Assassins, so as to settle down and pursue lives of normalcy.[2][3] They planned to reunite in Tyre once Harash has been killed, where they would then make their escape via a ship in the harbor. Before parting ways, Adha gifted Altaïr a sword far superior to the ones he previously wielded.[2]

"Kill him, Altaïr, and then come with me. We'll hide, we'll go as far as possible."
―Adha to Altaïr on their plans together[src]-[m]

While Altaïr returned to the Assassin citadel at Alep in secret, Adha hid herself on their ship in Tyre. Unbeknownst to her, she had already been discovered by the Templars before Altaïr had completed his mission. The Templars, suspecting that she was waiting for Altaïr, hoped that they could exploit this as a means to easily locate the enemy that had caused them so much trouble. As such, they initially left her alone, fearing that alerting her to their presence could result in her fleeing and a failure to catch Altaïr by surprise.[2]

After Altaïr assassinated Harash, the Templars abandoned this course and seized Adha. Altaïr, aware that Adha had been discovered thanks to a prior Templar report to Harash, rushed to the Tyre harbor to find himself face to face with the Templar's entire army under the direct command of Basilisk.[2]

As Templar knights forced Adha onto one of their ships, Altaïr furiously fought his way through masses of soldiers in a desperate attempt to reach her in time. Eventually, the Assassin leapt onto the ship just before the one that held Adha, but was impeded by the imposing figure of Basilisk himself. Unable to bypass the Templar leader, he was forced into a final duel with this mortal enemy, all while Adha and her captors watched from afar on the deck of their ship.[2]

Basilisk, as in his past fights with Altaïr, was defeated by his superior mobility, yet even as the Assassin dealt the killing blow, the Templars sent a fire boat crashing in between the two ships. In the resulting explosion, Altaïr was prevented from leaping to Adha; he made a last minute dive into the water to escape the inferno. When he returned to shore, he could only watch as the Templar ship holding Adha captive sailed off far off into the distance. He called out to Adha, promising to her that he would find her one day, as it disappeared over the horizon.[2]

"I had thought Adha would be the one to lead me to rest, that I might lay down my blade and live as a normal man. But now I know such dreams are best left to sleep..."
―Altaïr, in his Codex.[src]-[m]

For many days and nights, Altaïr pursued the Templar ship across the Mediterranean Sea , but in the end to no avail. When he had at last nearly caught up with Adha, she was executed by the Templars, and he could do little but cradle her lifeless body in his arms once he found her.[3]

Adha's death would go on to haunt Altaïr for the the next year or more as he embarked on a quest for revenge, hunting down each and every last man responsible for her demise. So thorough was he that not a single Crusader with any connection to her murder remained alive by the time he was finished. In spite of this, he was unable to derive any solace from their deaths, and he returned to the Assassins numbed and heartbroken from his tragedy.[3]

Contrary to his expectations, the Assassins did not punish Altaïr for assassinating Harash, and he remained a respected member of the brotherhood until his transgressions compromised them the following year. While he was welcomed back with full arms, this did not allay the scorn he had begun to feel towards the Creed, fueled in part by his bitterness over his failure to live a normal life with Adha.[4]

His defiance towards the brotherhood eventually manifested during the mission to Solomon's Temple for the Apple of Eden in 1191, where he violated all three tenets in rapid succession. Not until his subsequent mission to regain his lost esteem in the face of demotion was his respect for the Assassins revived, as the experience—and standing against his traitorous Mentor—reinvigorated his passion to resolve the conflicts of humanity.[4]

News of Adha's fate did not reach the ears of all Assassins, and in his grief, Altaïr refrained from openly discussing it. During his preparations to assassinate Abu'l Nuqoud in Damascus in 1191, one of the Assassin informants inquired as to her whereabouts, mistakenly believing that Altaïr was still searching for her. When he was met with only silence, the clueless informant consoled that he had faith he would find her someday.[4]

After Adha's death, Altaïr felt that he would never again feel for another woman as deeply as he had felt for her, but he was eventually proven wrong when he fell in love with Maria Thorpe, a Templar who defected and ultimately married him.[3] 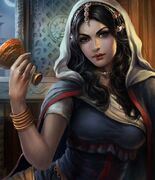 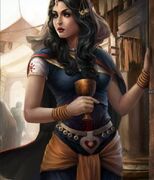