Actaeon (died 48 BCE), also known as the Vulture, was an Egyptian nobleman and a member of the Order of the Ancients during the reign of Ptolemy XIII.

In 48 BCE, Actaeon was killed by Aya,[1] who had been tracking the Order in Alexandria following the death of her son Khemu.[2] After learning of Actaeon's assassination, one of his "brothers" known by the cryptonym of the Ram, Ktesos, sought to avenge his death. he tracked Aya to her home, where she killed him instead.[1] 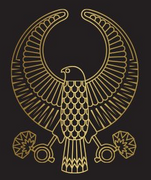 Actaeon's symbol within the order