The main port of the eastern Mediterranean Sea.

The Acre harbor was the main port of Acre, located in the Middle District of the city, and was a location of strategic importance to the Crusader cause and Richard I of England during the Third Crusade.

The harbor covered a huge area and possessed two lighthouses located to the east and the south of the docks. It was separated from the rest of the city by huge walls, only accessible through two gates.[1]

In 1191, Sibrand, Grand Master of the Knights Teutonic[2] and secretly a Templar,[3] planned a blockade of the harbor in order to prevent King Richard from receiving aid from overseas.[2] However, the Levantine Assassin Altaïr Ibn-La'Ahad infiltrated the harbor and assassinated Sibrand on his own ship.[4]

The western lighthouse with Sibrand's ship in front of it. 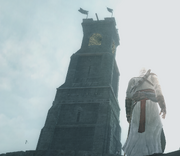 The eastern and main lighthouse.

The north gate to the docks. 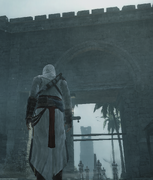 Altaïr in front of the south gate to the docks. 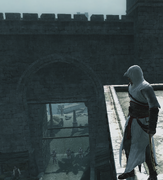 The south gate to the docks, as seen from the rooftops.

Français
Community content is available under CC-BY-SA unless otherwise noted.