Achilles was a Greek warrior who was most famous for participating in the Trojan War, a conflict traditionally dated around 1200 BCE. A central character of the Iliad, an epic poem by Homer, he is the greatest warrior in the story.

Legend has it that he was invulnerable throughout his entire body except for one of his heels because when his mother, the Nereid Thetis, dipped him into the river Styx as an infant so that he may become invincible, she held him by one of his heels.[1]

In his childhood, his mother hid Achilles in the court of King Lykomedes of Skyros, disguised as one of his daughters, in an attempt to protect him from his foretold fate.[2]

At some point, the centaur Chiron tutored Achilles.[3]

Achilles' lover and one of his closest friends was the Lokrian Patroklos, who was said to have been slain during the Trojan War, and later appeared as a ghost to Achilles.[4]

As a consequence of his invulnerability covering everything but his heel, he was ultimately slain by Paris when the Trojan prince fired an arrow into his vulnerable heel.[1]

In a simulation of the Underworld created by the Isu Aletheia, Achilles was one of the four champions Hades tasked the Spartan misthios Kassandra to replace Cerberos as a guardian of the Underworld. Tracking him to the Hall of Maniai, Kassandra engaged him in combat and bested him. Achilles then agreed to go and protect the Gate of the Glorious.[5]

By the time of the Peloponnesian War, the northern region of the island of Skyros had been named after Achilles and the city hosted a temple dedicated to him on its fortified acropolis.[2] It was also the base of the bandit group known as the Dagger which worshipped him.[6]

According to Barnabas, the captain of Adrestia, Achilles' tomb was located on the island of Andros.[7]

In 48 BCE, a hunter bow named the Achilles Heel Seeker found in Egypt was marketed as based on the design of Paris' bow.[8] The Medjay Bayek of Siwa also found a shield which was claimed to have ultimately belonged to Achilles.[9]

In 2012, Achilles was one of many historical people included in the Glyph puzzles the late Assassin Clay Kaczmarek had left behind in the Animus as messages for his successor Desmond Miles to decipher. Desmond later did in September of that year.[10] Desmond solved this puzzle, which was part of a set titled "Instruments of Power" where Achilles was excluded from the list of historical individuals revealed by Clay to have wielded a Staff of Eden.[11]

Achilles also spelt Achilleus (Ἀχιλλεύς) is an Ancient Greek name derived from ἄχος (áchos) "distress, pain, sorrow, grief" and λαός (laós) "people, soldiers, nation", resulting in a proto-form *Akhí-lāu̯os "he who has the people distressed" or "he whose people have distress".

When playing Assassin's Creed: Odyssey as Alexios, the armor set gained by completing The Heroes of the Cult-memory is called the Achilles Set. The belt of that set mentions how it was given to Achilles by his mother, the Nereid Thetis.

The mural featuring Achilles in Assassin's Creed: Odyssey is based on the reconstruction of Polygnotus' Nekyia.

The Rage of Achilles by Giovanni Battista Tiepolo 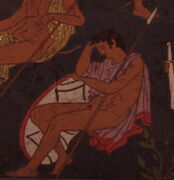 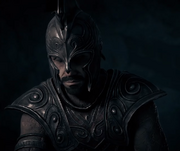 Achilles in the Hall of Maniai

Achilles at the Gate of the Glorious

The Quarrel Between Agamemnon and Achilles by Gaulli Giovanni Battista