Order of the Ancients
Artabanus' group

The Achaemenid Empire was the first Persian Empire, which firmly defined the Persian identity. Founded by Cyrus the Great in 550 BCE, it ruled over Western Asia, conquering the Neo-Babylonian Empire in its entirety, annexing Egypt, and reaching as far as Greece.

Around 524 BCE during his conquest of Egypt, Emperor Cambyses II sent an army of 50,000 soldiers to destroy the Oracle of Amun in Siwa, but it was buried in a sandstorm in the Isolated Desert.[1] In 522 BCE, Cambyses was usurped by Gaumata, and died before being able to confront him. Gaumata was in turn defeated and overthrown by Darius I, who was supported by the Order of the Ancients.[2]

In what became known as the Greco-Persian Wars, the Persians attempted twice to subjugate the rebellious Greeks in the first half of the 5th century BCE.[3] In 465 BCE,[4] Emperor Xerxes I was assassinated by Darius in what became the first recorded usage of the Hidden Blade.[5][3]

After Xerxes' death, his eldest son Artaxerxes I succeeded him as Emperor, reigning from 465 BCE. During the 420s BCE, his younger brother, Hystaspes, plotted his assassination, hiring Darius to poison the emperor. Artaxerxes survived the assassination attempt however, but not without losing his vision. Faking his death, Artaxerxes fled to Greece, and sought refuge in the city of Megaris.[3] Also during the 420s BCE, Mestor of Samos made plans with the Persians to invade the island of Samos, in exchange for being able to rule it, but was prevented by Herodotos and Kassandra.[3]

Around 343 BCE, Artaxerxes III led an invasion of Egypt with his generals Mentor of Rhodes and Bagoas.[6]

The Achaemenid Empire ultimately fell to the might of Alexander the Great of Macedon in 330 BCE, but the restive locals assisted Iltani of the Babylonian Brotherhood in poisoning Alexander to death.[7]

Great Kings of the Achaemenid Empire 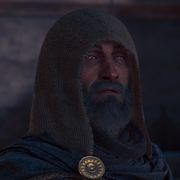 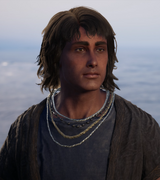 Persian fleet during the Battle of Thermopylae