Accipiter was an Aleman general and a member of the Liberalis Circulum, the Roman branch of the Hidden Ones. In 259 CE, Accipiter was in a leading position of the Alemanni forces, leading them in battle across Gaul, hoping to conquer the region.

In 259 CE, Accipiter somehow acquired the Ankh, a Piece of Eden. He arranged a meeting with his cousin Aquilus to give him the artifact for protection but soon found himself fighting a small army of Romans. After the Alemans won the battle, Accipiter found Aquilus unconscious inside the Roman general Gracchus' tent. He took Aquilus with him to his home to tend to his wounds.[1]

When Aquilus regained consciousness, Accipiter told him about the battle that had taken place, and the next morning the two traveled a short distance towards Aquilus' destination. They stopped near a river, where Accipiter gave Aquilus the artifact. After Aquilus made an urgent request to the Aleman to spare his hometown of Lugdunum from conquest, the two parted ways and Accipiter returned to the Alemanni.[1]

Later that year, Accipiter participated in another battle with an army of Romans, slaying numerous Roman soldiers. The Alemanni celebrated their victory that night, where Accipiter was greeted by his Brother Cuervo, an Iberian member of the Liberalis Circulum whom he did not recognize at first. Cuervo explained that he had been traveling to Lugdunum and that he knew of the Aleman plans to conquer Gaul. Emphasizing Ludgunum's importance to the Liberalis Circulum, Cuervo proposed for Accipiter to make an alliance with the Prefect of Lugdunum, thus sparing Lugdunum from ransacking but also creating profit for the Alemanni, a compromise to which Accipiter agreed.[2]

Accipiter met with the Prefect of Lugdunum outside his city, demanding a ransom in exchange for the city's safety. Though reluctant at first, the Prefect of Lugdunum eagerly gave Accipiter his demand after hearing threats from the Aleman general. The Prefect was joined by another man, who whispered that the preparations for Aquilus' arrest and trial were ready. Accipiter overheard the discussion, and, after giving all the money to his men, he rushed off to Lugdunum to find his cousin. Searching through Aquilus' villa, Accipiter only found the housemaid present, who informed him that both Aquilus and his wife Valeria had been taken by Roman guards to trial in Rodumna.[2]

Picking up the Romans' trail, Accipiter eventually ambushed the Roman convoy holding Aquilus and Valeria captive. One of the Roman guards, upon spotting the Aleman, slit Aquilus' throat, but they all met an expedient death from Accipiter's bow. The Aleman rescued the pregnant Valeria and wrapped Aquilus' body in a cloth. After fleeing the scene, the two set up camp, where Accipiter requested that Valeria personally hide the Ankh somewhere safe, as Accipiter himself was waging war and did not want to risk the artifact ending up in the wrong hands.[2]

Accipiter was both a barbarian general and a loyal supporter of his family. Despite being on opposite sides from the Gallo-Roman member of the Liberalis Circulum, Aquilus, Accipiter not only took responsibility for his cousin's life on the battlefield, he also swore to spare Aquilus' hometown.[1]

Accipiter was a talented commander, having led attacks across the Danube and the Rhine. He also understood the value of attrition warfare – he had spent a significant proportion of his military career attacking Roman camps and fortifications. Aside from his mercy toward his cousin and Lugdunum, Accipiter won many victories for himself and his people through his tactics and prowess on the battlefield.[2]

Accipiter is Latin for "hawk", presumably derived from the verb accipiō meaning "to take, to seize".

A close-up of Accipiter

Accipiter in the midst of a battle 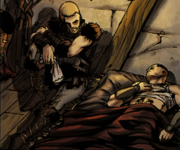 Accipiter sitting next to a wounded Aquilus

Accipiter meeting with the Prefect to ensure Lugdumun's safety

Accipiter trying to rescue his cousin