" Is it so different than your own work? You take the lives of men and women, strong in the conviction that their deaths will improve the lots of those left behind. A minor evil, for a greater good? We are the same."
―Abu'l Nuqoud during his final moments, 1191.[src]

Abu'l Nuqoud (c. 1137 – 1191) was the merchant king of Damascus and a member of the Levantine Templars. He lived in an opulent palace in Damascus' Rich District.

Abu'l Nuqoud was the fourth person assassinated by the Assassin Altaïr Ibn-La'Ahad in his quest for redemption. His death – like those of his eight Templar brothers – had been ordered by Al Mualim, the Mentor of the Levantine Assassins.

"I've pledged myself to another cause. One that will bring about a new world in which all people might live, side by side, in peace. A pity none of you will live to see it."
―Abu'l Nuqoud addressing the crowd at his party, 1191.[src]

The merchant king of Damascus, Abu'l Nuqoud had, at some stage in his life, joined the Templar Order and gained knowledge about an Apple of Eden, which the Templars planned to use for their own ends. When Altaïr sought out Abu'l Nuqoud, he learned that the merchant king had organized a lavish party at his palace for the nobility of Damascus. The party had been organized using money that had been stolen from the city's treasury. The money was also used to finance the Templars' plans for their New World Order.[1]

After the guests had settled down, Abu'l Nuqoud, speaking from his balcony, proposed a toast for their generosity. However, in the middle of his speech, he proceeded to lambaste them for their hatred and hypocrisy in supporting Salāḥ ad-Dīn and his war campaign. It was soon revealed that he had poisoned the wine in order to exact revenge on the people who tormented him with their cruel words and bigotry, and then ordered his men to kill anyone who tried to escape.[1]

Following this, Altaïr took advantage of the ensuing panic to pursue the Templar and eventually assassinate him. In his dying words, Abu'l Nuqoud told the Assassin that he had not joined the Templars for revenge, but to create a new and better world, instead of pretending to follow a god who called him an abomination. He also challenged Altaïr's willingness to strike down anyone when it was ordered by Al Mualim, remarking that Altaïr might doubt the worthiness of his cause.[1]

Abu'l Nuqoud: "Look at me! My very nature is an affront to the people I ruled, and these noble robes did little more than to muffle their shouts of hate."
Altaïr: "So this is about vengeance then."
Abu'l Nuqoud: "No, not vengeance. But my conscience. How could I finance a war in service to the same god that calls me an abomination?"
—Abu'l Nuqoud, 1191.[src]

Abu'l Nuqoud could not bring himself to support a war for a god who labeled him an abomination. He threw large and extraordinary parties, decorated his palace with expensive works of art, and fed himself the finest foods, all while wearing expensive and luxurious clothing.[1]

He would even murder dozens of innocent citizens for the sake of his own pettiness and frustration, blaming them for his problems, and for talking about him behind his back. He hated the poor and saw them as a blight upon the land, believing them to be the source of everything wrong with the world. He also took pleasure in tricking and torturing those of lesser means, and was incredibly self-centered.[1]

Abu'l Nuqoud was an obese man, wearing velvet robes with yellow patterns and leopard print fur. His robes were usually open, displaying his large stomach, and he wore long, loose olive colored pants with yellow, pointy-tipped shoes. He also wore a turban, decorated with a feather pinned by a brooch with a cross engraved into it, as well as multiple pearly strands with a coin pendant. His face was also marked by severe acne.[1] 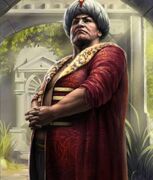 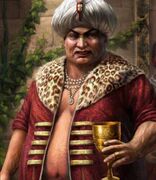 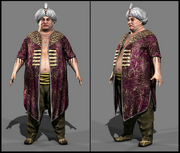 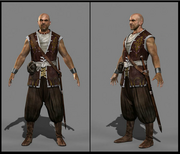 The party guests drinking wine from the fountain

A party guest affected by the poisoned wine