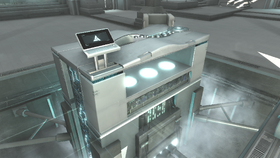 "You're inside the Animus. It's a projector which renders genetic memories in three dimensions."
―Warren Vidic to Desmond Miles, 2012.[src]

The Animus (plural: Animi) is a virtual reality machine rediscovered, developed, and sold by Abstergo Industries. It allows the user to read a subject's genetic memory, and project it onto an external screen in three dimensions.

The machine was notably used in Abstergo's Animus Project and the Animi Training Program. The former analyzed the genetic memories of several select subjects, usually to gain information on the Assassin Order or on Pieces of Eden, while the latter was used for the training of Abstergo employees.

A newer model of the Animus, known as the Animus Omega, was developed and distributed commercially by Abstergo as an entertainment console. It was compatible with video games consisting of recorded memories. (read more...)