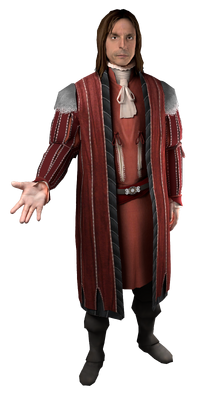 "Family. Justice. Honor. These are the values guiding my blade. This truth is written in blood, and the shadows are where I strike. I am Giovanni Auditore, and like my ancestors before me, I am an Assassin."
―Giovanni Auditore.[src]

Giovanni Auditore da Firenze (1436 – 1476) was a Florentine nobleman, the head of the Auditore family in Florence, and is an ancestor to both Clay Kaczmarek and Desmond Miles, the latter through the paternal line.

Despite being the head of the Auditore International Bank, working alongside the Medici family, Giovanni's true nature as an Assassin was known only to a few individuals. Raised and trained along with his brother Mario from birth to be an Assassin, Giovanni had been aware of the Templar Order for almost all of his life.

Giovanni was also the husband of Maria Auditore, and father to Federico, Ezio, Claudia and Petruccio. He sought to induct his children into the Order, but had only revealed his allegiance to his wife before the time of his death; despite this, he had already begun to train his eldest son in the Assassin ways, albeit secretively. (read more...)