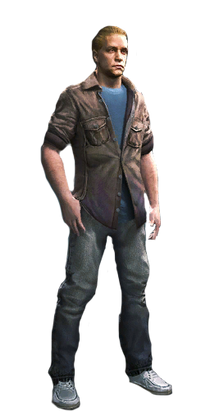 "What is a man but the sum of his memories? We are the stories we live! The tales we tell ourselves!"
―Clay Kaczmarek.[src]

Clay Kaczmarek (1982 – 2012), also known as Subject 16 of the Animus Project, was a member of the Assassin Order during the early 21st century. Born into a family of engineers, Clay faced psychological problems due to developmental disorders and his father's neglectful attitude. Because of this, Clay ran into the Assassins while looking for acceptance.

As a member of the Assassin Brotherhood, Clay's most important mission was to infiltrate Abstergo Industries as a subject of the Animus Project, in order to obtain more information on the Animus. Labeled Subject 16, Clay was forced to relive the memories of his ancestors via his genetic memory.

When Clay found out that his teammate, Lucy Stillman – who infiltrated Abstergo years before and was tasked with getting Clay out of Abstergo safely – had abandoned their cause to join their enemies, the Templars, Clay had to spend days and hours of sessions inside the Animus.

Since it left his mind incapable of separating his own personality from those of his ancestors', Clay became mentally unstable to the point that he ultimately committed suicide. (read more...)