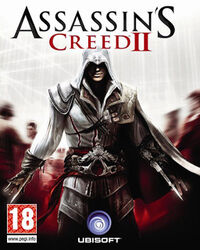 A direct sequel to Assassin’s Creed, the game is focused again on Desmond Miles after he escapes Abstergo Industries with employee Lucy Stillman. In an attempt to thwart Abstergo and the modern-day Templars, Desmond uses a new Animus to relive the genetic memories of his ancestor, Ezio Auditore da Firenze, who lived in Italy during the late fifteenth and early sixteenth centuries. The player controls Desmond, to a degree, but primarily Ezio, who becomes an Assassin after his family is betrayed. While controlling Ezio, the player can explore renditions of major Italian regions and cities through a mixture of action, stealth, and economic gameplay.