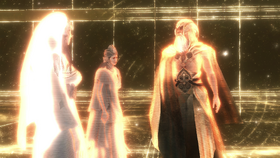 The First Civilization, also known to some as Those Who Came Before, or the Precursors, was an ancient and advanced species of humanoid beings that were amongst the first to call Earth their home. They were responsible for the creation of the Pieces of Eden, as well as the human race itself, whom they used as a domestic workforce. With early humans unable to comprehend the First Civilization for what they truly were, they were looked upon as gods.

Eventually, war broke out between the First Civilization and their then unoppressed human slaves; this, coupled with the onset of what would be referred to as the "Toba catastrophe", would see the First Civilization slip into extinction. Despite this, their legacy would live on for thousands of years in various myths and legends. (read more...)