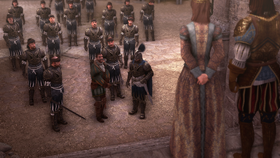 "Cesare persuaded King Louis to lend him an entire army to defeat me. I'm flattered."
―Bartolomeo d'Alviano regarding the French, 1503.[src]

Bartolomeo had been ensnared in a losing battle with the French for a few years, and it had grown worse with the addition of Borgia soldiers. However, the Assassin, Ezio Auditore da Firenze, aided Bartolomeo in his fight by assassinating Battista Borgia, causing the Borgia troops to withdraw from the battle.

Following the battle, the Assassins were able to focus their attention to the Borgia, having driven the French soldiers from Rome. This led the Assassins to procure a key to the Castel Sant'Angelo, enabling them with full access of the Castello. (read more...)