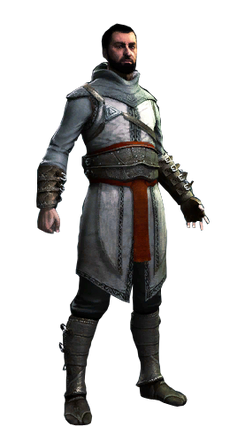 Mukhlis: "He takes our money and gives us nothing in return, where once the citadel was the heart of the community from which came strength, guidance..."
Altaïr: "And protection."
Mukhlis: "That too. All those things left with you, Altaïr, to be replaced by... corruption and paranoia."
—Mukhlis and Altaïr discussing Abbas' leadership.[src]

Abbas Sofian (1166 – 1247) was a Syrian Assassin during the Middle Ages, and the Mentor of the Levantine Assassins from 1227 until his death. His leadership over the Levantine Brotherhood showed a period of corruption and disregard for the Order's Creed, resulting in the decline of their castle in Masyaf and its villagers fearing and secretly loathing the Assassins.

Raised as an Assassin from birth alongside Altaïr Ibn-La'Ahad, the two became best friends during their childhood. However, after Altaïr revealed to Abbas that Abbas' father Ahmad had killed himself, rather than leave the Order as Abbas had believed, Abbas labelled Altaïr a liar, and developed a hatred for him that would span a lifetime. (read more...)