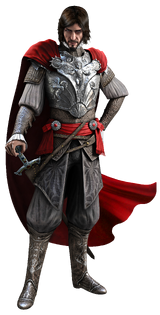 Cesare Borgia (1475 or 1476 - 1507) was the son of Rodrigo Borgia and a nemesis of the Assassin Ezio Auditore. Like his father, he was a member of the Templar Order. Eventually, he became Captain General of the Papal armies, though he secretly plotted against his father to take over Rome, and all of Italy afterwards.

Even before his father's death, he claimed the rank of Grand Master of the Templar Order, usurping the title completely when his father eventually died. Although he appeared to be loyal to the Templars, he only desired control of the powers of the Apple. (read more...)