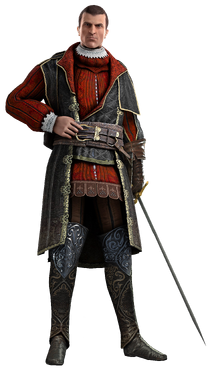 "I am an Assassin. Trained in the ancient ways to safeguard mankind's evolution. Just like you, and each one of us here."
―Niccolò to Ezio Auditore upon their first meeting.[src]

Niccolò di Bernardo dei Machiavelli (3 May 1469 – 21 June 1527) was an Italian philosopher and writer, and a member of the Assassin Order. Being considered one of the main founders of modern political science, he was a diplomat, political philosopher, musician, and playwright, but foremost, he was a civil servant of the Florentine Republic.

He was most famous for his writing, The Prince, which lays out guides to achieving political power through, among other techniques, the art of deception and manipulation, establishing what would later be known as "Machiavellian ideas."

With the Assassin Order, Niccolò primarily worked with his ally Ezio Auditore da Firenze, and helped him with driving the Orsi brothers from Forlì and with removing the monk Girolamo Savonarola from power in Florence to obtain the "Apple of Eden" - an ancient artifact - from him. (read more...)