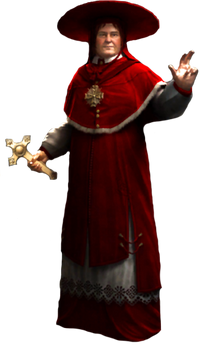 "The finer things in life make power so rewarding. I see an apple, I can pluck that apple. No one will stop me."
―Juan Borgia to a courtesan, 1503.[src]

Juan Borgia the Elder (1446 - 1503) was one of Cesare Borgia's three generals, who ruled over Rome during the reign of Pope Alexander VI. He was the first Cardinal-nephew appointed by Alexander, and also a member of the Templar Order.

Often referred to as "the Banker", he handled Cesare's military funds and aided the Borgia's campaigns to subdue Italy for the Templars. However, he also spent a considerable amount of money throwing lavish, and often sexually-oriented, public parties. (read more...)