^Agreed with the Above. Just like AC3 it renewed, refreshed, and reformed the series. Which is why both are in my top favorite AC games.

Origins is something I've always wanted: A game set in Ancient Egypt (and more).

Ubisoft created yet another game that makes me a fan just based off one game alone.

I like both. Evie is the serious, "by the book", true assassin; Jacob is the jokester, cavalier, playboy assassin.

A reply to Jordan isle
0

I'm starting to think it's you 😅

I would, could be interesting. Its basically Red Dead Redemption but Assassin's & Templars lol. I like it.

I was not incensed, angry, or anything. I clearly explained all my views. I apologize they were not clear and that wrong interpretations came across.

I've exposed every bit of my intentions. I have no ulterior motives.

I have no qualms about peoples view of the game, maybe specific points sure, and I may disagree on other points, but I dont mean to stifle anyone's views or claim they are wrong and that I am right. No.

Every AC game deserves criticism, Odyssey especially because of its faults. I have no issue with that.

^Without rudeness, sarcasm, or aggression. With all I said, is that really the only thing that you take from it?

I meant no harm. Nor any ill intent, yet you seem hell bent on making me the villain. What's wrong with me adding to my on topic comment that we need to make sure we phrase as our opinions, as opinions, not as facts?

A reply to Jordan isle
2

^I agree with the score above.

I'm tied between AC3 & Black Flag. I enjoyed being Conor over Edward, yet the Exploration of Black Flag was way better. Black Flag had a better setting, even though I enjoyed Hunting and running through the frontier more.

Where is Freedom Cry btw?

So you're debating with me because you feel my points accomplish nothing, and went off tangent- so what are you debating now? What are you trying to accomplish? Are you still on topic?

Honestly I feel your the aggressor here for no reason. I clearly explained my views and explained why I said them....yet youre still asking what did I accomplish?

Just like everyone else I stated my opinion. I dont have to achieve anything, I'm just sharing in the discussion- and I am on topic. You say it has nothing to do with the topic. I explained it does. You say its bland and broad statement, when I explained how it's not.

Fine let's go over this again....if it's not clear this time, then we drop the discussion....fair?

1) I am presenting my opinion in this topic that has evolved into "How do you view the game?".

3) I further explained that opposing views towards the game are just merely of those who dont have the same taste as those who like the game. Yes, which we know. I did this to explain that everyone is different, and just because they explain why they may not like the game, it may not be true for those that do, and thus is not fact, so let them like what they like, same vice versa. Yes, we know that. The purpose of the statement was to create an atmosphere of "Awareness" and then also "respect". If we recognize all of our views are only opinions, and every has a different view, maybe we'd be able to just go "Hey that's how you feel. No prob. It's not how I feel. That's ok👍🏾". Its an attempt for us not argue over baseless things, and accept people have different views.

4) I had an issue with people stating opinions as facts, so I said I think it's better if we presented our thoughts as such.

5) What does that accomplish? It is a hopeful reminder to get people to share in these conversations as I feel we should. Example: Instead of "It sucks" why not say "I feel it sucks." Or "In my opinion it sucks".

Why do I feel the thoughts need to phrased so? Humblness. Realizing our opinions is one among many I believe will help opposing sides not come off so aggressive, or respond aggressively. Instead most become so entrenched in their own feelings that they speak in a way that their views are right and all others are wrong. I do not like that in discussions. I wanted to change that.

6) I have no issue with people who feel the way they do about Odyssey.

7) My points of "opinion" were challenged by @Aadil Sayad . And we had a brief debate about that.

8) You joined in the conversation mistakenly thinking I said and meant that the game should be judge out of context of the series. I explained that is not what I meant.

9) You understood my stance (I believe), but then asked what am I arguing?

10) That eventually led us here.

Do you now see?

Obviously the discussion invited differing views, I gave mine. It turned into a discussion of "How do you view the game"....and that's why I presented my thoughts.

Besides let's not act as if I am totally off topic, or that all these discussions dont ever off tangent from time to time. Anyways. My views are discussing the opinions presented. The topic is: Why dont some like the game?

I answer by saying people have different taste, and basically what appeals to you about the game may not appeal to them same vice versa- meaning that although some feel this way, it is not true, because it is opinion. I mention that because people stated their views as fact.

What's the issue? I was not being rude or belligerent towards others.

You must've missed my entire first two comments because I clearly explain that. Or must've missed how the conversation on my side evolved. Either way my comments add to the discussion of "is Odyssey a good game or not?".

Its seems the overcriticalness didn't allow my point to get through. So nvm.

Best example? No. But the point was still there, but missed.

Along with what I said previously, everybody has their own personal taste and views. Doesn't make either of us right, even if majority agrees with either of us- it just means more people feel the same way.

And I never said Odyssey was "better" than anything.

^You can look that up and see how well the game did. Besides it was just an example.

Backing up your opinion with facts doesnt make it fact, in this case it's still an opinion.

And No, an opinion can be reinforced by facts and evidence, but it doesn't make it anything other than a opinion.

I can tell you Odyssey is the one of the best games of the series and point out the fact that in its first few weeks it did better than any other AC game and it's one of the top selling AC games. 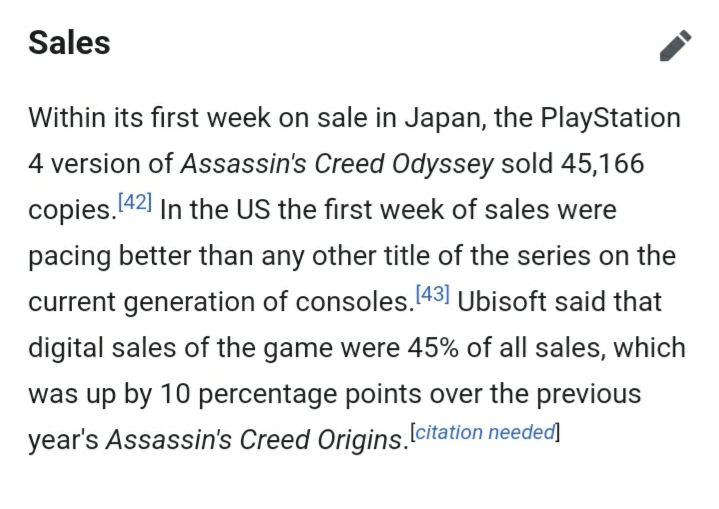 But at the end of the day, that view is still an opinion.

I think the criticisms are only "fair" to the people who share the same view.

I say neither Kassandra/Alexios are dull. But that's my view against yours. The AC Fandom is not a homogeneous group lol, I doubt most worldwide would agree with either one of us.

People said Conor was dull, I disagree. People like Ezio over Bayek. I do not.

No need to apologize, but appreciated. You didn't make it seem that way.

That's exactly my point, and that of others. You just admitted that you judge the game in the context of the series, not as just a game. But you phrase most of your view as if it's a terrible game period, and that by far...its ok at best.

Either way, that's your view. But I just dont judge games through 1 lens. I look at them from multiple angles to get a fair judgment.

Regardless of context, the game still did well, and people still liked it. That shows that the topic of if the game is good or not is strictly in the eyes of the beholder.