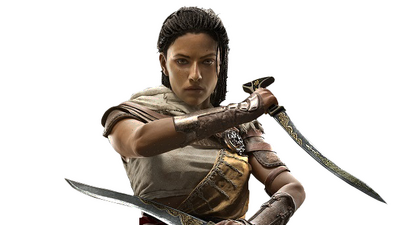 Amunet (born c. 85 BCE), born Aya of Alexandria, was the Greco-Egyptian co-founder of the Hidden Ones and by extension, the Assassin Brotherhood alongside her husband, the Medjay Bayek. Prior to establishing the Hidden Ones, Aya served as an agent of Cleopatra VII during Cleopatra's war for the... 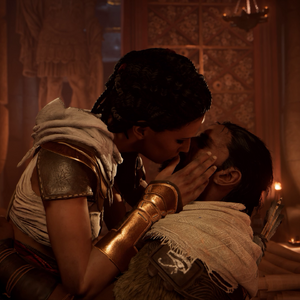 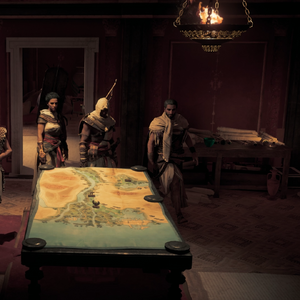 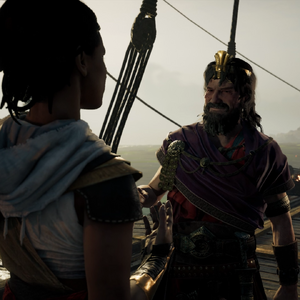 This is an idea for an Graphic novel about Bayek.

In Rome, Bayek and Amunet find outs that the Order of Ancients has arrive in Rome, and is lead by their leader, "The Snake", an member of the Cult of Kosmos, she had worked for Crassus to defeat Spartacus and to fight with the Parthians in Carhae.

Bayek and Amunet are helped by one of Amunet's apprentices, Marius, Leonius' grandfather, he tells Bayek the story of Spartacus and How Crassus has allied with the Order of Ancients.

They also find out about Cleopatra's romance with Mark Antony, which Bayek and Aya are totally disagree, and Bayek hears the whole story, and is told by an Centurion named Lucius Vorenus, he was one of the Centurions that fought with Caesar, but his other friend Titus Pullo has joined the Order of Ancients,and his wife was killed by "The Snake" soon Lucius decides to join the Hidden ones.

Meanwhile, Bayek finds out that Kawab was kill in Judea, when he was trying to counter King Herod.

That moment, Bayek and Aya had another son, and they name him Khemu, (Named after their death son).

Soon they realise that "The Snake" is not only working with Octavian, but with Cleopatra and Mark Antony, and she is making the Order of Ancients and The Cult of Kosmos work together.

Later Bayek has an vision with the Isu Horus.

Bayek and Amunet wants to expand the Brotherhood from Hispania to the Korean Kingdom of Silla.

After that Bayek decides to return to Egypt and raise Khemu, but Amunet stays in Rome, while Marius decides to go China (To kill Emperor Yuan of Han and help Prince Cheng), while Cassia will go to India (To help the Kanva dynasty) and Korea (To help King Hyeokgeose of Silla).

I always wanted an game set in Ancient Rome, this the things I want to happen

Is set around 31 to 27 BC, after the Battle of Actium, Cleopatra and Mark Antony has been defeated by Octavian later call Augustus, member of the Order of Ancients.

Cleopatra's sons has been taken as war prisoners, and Khemu (named after his death brother, Khemu), son of Bayek and Aya, has been forced to keep them, but by Marcus, an general from Hispania Tarraconensis and member of the Order of Ancients, has kidnapped Khemu.

But Khemu kills Marcus, now he must have revenge on the Licinia family, because by the fault of Crassus (You know by defeating Spartacus) and by being members of the Order of Ancients.

He must build an Brotherhood, and expand it from Hispania to Korea, to end the Tyrannical rule of the Order of Ancients.

He will do this with the help of his girlfriend Athenais and his friend Alara of Nubia.

•The map will be expanded from Hispania to Korea.

•Bayek and Aya will come back.

•The return of the Hidden blade.

•I want one based on Gladiators.

•And a crossover with League of Legends.

AmunetBayekAquilusKhemuLeonius
Yes! Of Course.
No! For another time.