To all our readers, fellow fans, and editors alike,

It will not have escaped your attention that in July 2020, journalist Jason Schreier revealed that accusations of sexual harassment and abuse has been occurring within Ubisoft studios around the world. This was followed in the succeeding months by numerous testimonies, all of which are too aberrant to ignore. A year later, although steps have been taken to remove the accused executives, journalist Thierry Mestayer reports that Ubisoft has taken only the most meagre steps to curb the toxic culture in which the company's employees operate, and more accounts continue to surface.

In a joint decision, the international Assassin's Creed wikis have decided to unite in the face of Ubisoft's lack of accountability and to give our support for the employees affected by this toxic culture. While we will not stop providing you with Assassin's Creed lore content, we have chosen to invest more energy in creating and updating pages about the developers and studios behind Assassin's Creed games, as well as highlighting community members such as the AC Sisterhood initiative.

It is important that the developers behind the games we play can work in a safe and healthy environment. 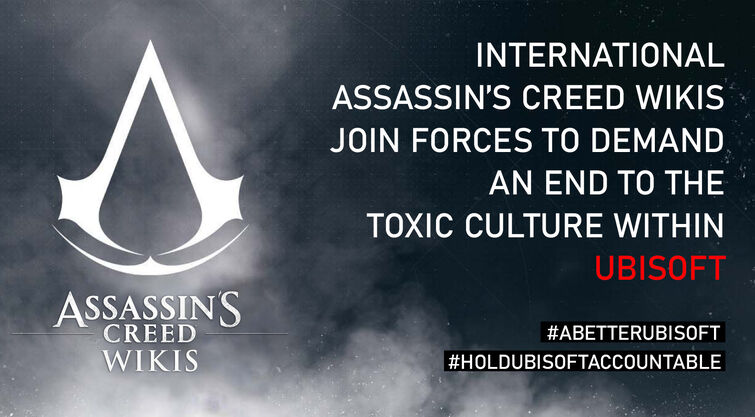 Can brothers get the help too or just sisters?

Everyone can help regardless of gender.

I've got no cards in this but I'm always good to talk to as well. :)

Boycott their goods and services. Hit them in their wallet and you might have a chance.